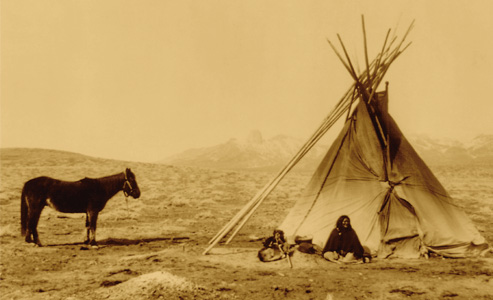 he Utes call themselves the people of the horse. As the first unconquered tribe to obtain horses and livestock, they became respected warriors of the Southwest.

Acquiring the horse around 1640 soon changed their lifestyle. Now that they could hunt more efficiently from horseback, the Utes could pursue their game in the summer and early fall, and return home in early winter. The Utes hunted elk, deer and buffalo, and they became famous for processing hides, which at first they traded to Mountain Men and the Spanish. These hides became one of their most important trading commodities. Hunting soon expanded to the eastern slope of the Rocky Mountains where buffalo became one of their main resources, providing the Utes with many useful products such as meat for food, hides for tipis, blankets, clothing, moccasins and bags of all kinds, sinew thread for sewing, bowstrings and other utilitarian objects.

The Utes quickly became known for their great horsemanship skills and were responsible for spreading horses among other tribes in the Plains, Plateau and the Great Basin. At one time every child growing up on the reservation knew how to ride a horse; it was a point of pride.  Handling horses was both a tradition, a survival skill and a practical way of transportation.

Nestled between the La Plata and San Juan Mountains, the Southern Ute Cultural Center & Museum in Ignacio, Colorado, transports visitors back to the early 17th century, when the Utes first acquired the horse from the Spanish, to the 1870s, when the U.S. government placed the Utes on the reservation where they reside today, and to present-day Ute horse culture, expressed in everything from rodeo riding to Utes on horseback in Western movies. Although the Utes’ way of life changed, their traditions and heritage have survived, all of which you can experience during a visit to the museum. Displays of rare artifacts, historical photographs and flat-screen interactive and video presentations tell the story of the Ute people from their own perspective.

The horse and its essential role in the history, culture and economy of the Ute people are revealed in these historical photos from the museum’s permanent exhibit. They tell the stories of how the horse transformed Ute peoples from hunter-gatherers living in small family groups to tribes that moved at will over hundreds of miles, trading, hunting, raiding and growing stronger.

Lynn Brittner has been executive director of the Southern Ute Cultural Center & Museum since 2000. In 2011, a new $38 million museum opened in Ignacio, Colorado.