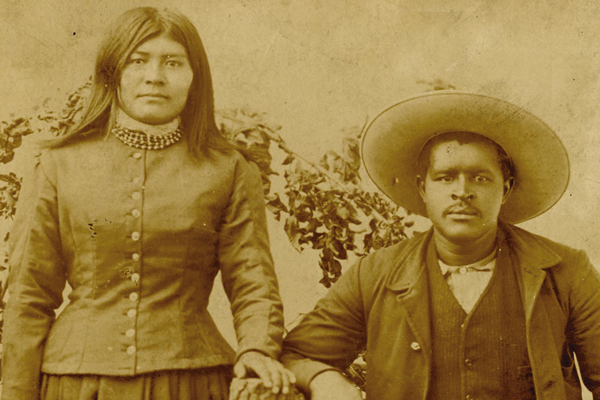 Men of African descent were in the West since the time of Spanish exploration in the 16th century.

Estevanico, a Black slave from Morocco, was among the explorers who landed near Florida’s Tampa Bay in 1528. A series of disasters followed, and the members made their way in makeshift barges to the coast of Texas. Indians enslaved them, and soon, Estevanico was one of only four survivors. They escaped captivity and reached the interior of Mexico by 1536. After sharing with explorers the stories his captors had told of the “Seven Cities of Gold,” Estevanico was picked as a guide to these fabled cities in 1539. Unfortunately, Zunis killed him on the way, leaving Francisco Coronado to lead the charge the following year.

Blacks also participated from the beginning in American exploration and settlement of the West. Notably, York, a slave, accompanied Lewis & Clark on their epic 1804-06 expedition. Black frontiersmen were trappers during the fur trade era. They fought beside the Texans at the Alamo. Blacks made the trek westward to Utah with the Mormons and to California with the 49ers. And during the Indian Wars, they served as scouts, hunters and soldiers.

After the Civil War, young Black men arrived in Texas and became cowboys. A few became lawmen … and outlaws. They performed in the Wild West shows in the last half of the 19th century and beyond.

Even with all this activity, Black Americans on the frontier were relatively few in number when compared to the White population. (John W. Ravage suggests Blacks comprised no more than three percent of the people in the 19th-century American West, in his 1997 book Black Pioneers.) Accordingly, photographs of Blacks in the West are rare and much sought by historians and collectors.

Even though the images are rare, photography does document Black presence in the West, beginning with daguerreotypes and ambrotypes of the gold miners in California. These photographs of the 1840s-50s are quite few and fragile, and the surviving examples are of great value. The tintypes and paper images that followed are also very scarce. Collectively, these images reveal much about the participation of African Americans in every part of the West from 1860 to the end of
the century.

Among the images are those of notable Black personalities, including James Beckwourth, Cherokee Bill, Reuben the Guide and Mary Fields. Also in this collection are wonderful photographs of anonymous Black scouts, soldiers, cowboys and housewives, doing their best to capture a piece of the American Dream.