The Regulators are riding, 19 strong, as they come down through the canyon leading to the Mescalero Agency, perhaps looking for more horses (they lost virtually all of their mounts in the McSween fight on July 19). The riders include the Kid, Tom Folliard, Steve Stephens, Frank and George Coe, Doc Scurlock, Charlie Bowdre, Henry Brown, Jim French, John Middleton, Fernando Herrera, Ignacio Gonzales and Atamacio Martinez. As they near the agency, the group splits with Billy and the Coes going to the left, heading for a spring on the south side of the canyon. The rest of the group, all Hispanos, stays on the main road. These bravos run into an Apache hunting party and firing breaks out on both sides.

A half mile away, at the ration house, the Indian agent Frederick Godroy and Morris Bernstein hear the firing and immediately mount to ride out and see what is the trouble. Godfroy later claims he “councils” Bernstein to be cautious. Godfory sees Bernstein “ride over the crest of a hill” as he hears more firing and as he gets closer, he meets Bernstein’s horse coming back without a rider.

Fearing for his life, Godfrey retreats back towards the agency, followed by a flurry of shots from the Regulators. Troopers stationed at the agency quickly mount up, and Godfrey leads Lieut. Smith and four soldiers back across the valley to launch a counter attack.

Across the valley, at the spring, the Kid was taking a drink when the firing began, and his horse got spooked by the gunshots and got away. Three other Regulators were also unhorsed in the melee that follows.

George Coe takes the Kid up behind him as the soldiers come at a gallop firing as they ride. George later said, “I’ll bet they shot fifty times at us. We were having to ride on the sides of our horses but they never touched a hair of us.”

Agent Godrey finds the body of Morris Bernstein “lying on his face, with four bullet holes in it. His Winchester rifle, pistol and cartridges were gone, his pockets were turned out and contents gone.”

The Kid, of course, gets the blame for the killing.

After the raid on the Mescalero Agency in which Morris Bernstein is killed, the Regulators rendezvous at Frank Coe’s ranch then head for the Pecos River to avoid Sheriff Peppin and his posse. Col. Dudley also sends out two detachments to track down the Regulators.

On August 16, the Regulators arrive at Bosque Grande and run into the Chisum party, headed to Fort Sumner and then on to Texas. The Kid and his gang ride along with the Chisum party arriving at Fort Sumner on the 17th. Since the fort is 120 miles from Lincoln, it is at this point that they may have relaxed and actually had a social event, or two. Several days later, the Regulators move north and visit the small communities of Puerto de Luna and Anton Chico where they sell off their stolen horses and party.

After this a meeting is held and George and Frank Coe announce that with the war over, warrants out for their arrests, and both their ranches looted, there is nothing keeping them in New Mexico. They plan on riding north to Colorado to start over. Dirty Steve Stephens, Jose Chavez y Chavez, and John Scroggins also decide to call it quits and go their separate ways. The remaining eight Regulators (Billy, Fred Waite, John Middleton, Jim French, Henry Brown, Tom Folliard, Sam Smith, and George Bowers), plan to ride back south to Sumner and, for the time being, continue to wage war on what remains of the Dolan faction. With all the decisions made, the Regulators all shake hands, say their goodbyes, and go their separate ways.

In late August, the Regulators arrive back in Fort Sumner and are reunited with Charlie Bowdre and Doc Scurlock. Both men still have their jobs on the Maxwell ranch and have also obtained living quarters in the old Indian hospital located at the edge of the old fort. They inform their fellow Regulators that they plan on moving their families from their ranches on the Rio Ruidoso up to Sumner. Meanwhile, Big Jim French rides on to Lincoln, where he resumes his role as Susan McSween’s bodyguard.

On the first of September, Bowdre and Scurlock move their families from Lincoln to Ft. Sumner. Billy and the other Regulators return to Lincoln, which is not defended by Dolan’s men.

On September 6, a gang of men from El Paso, led by John Selman, and referred to as the “Scouts,” or “Rustlers” sweep through Lincoln and rob a man of $40 and kill him. They continue down the Bonito, robbing and pillaging. They burn Frank Coe’s Ranch, wreck Hudgens saloon near Stanton, rape two women and seriously injure several others. With this new wave of violence, Susan McSween flees Lincoln for Las Vegas.

The Kid heads for Texas, landing in Tascosa and has several more adventures. If only he had stayed. Unfortunately, the lure of New Mexico is too great and he heads back to meet his fate. 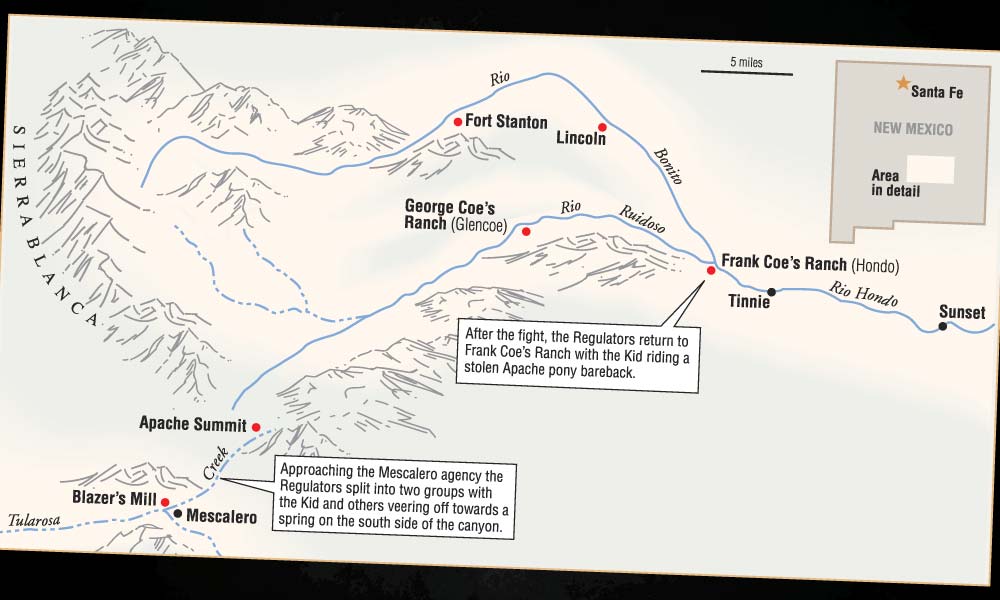 Recommended: The West of Billy the Kid, by Frederick Nolan, University of Oklahoma Press