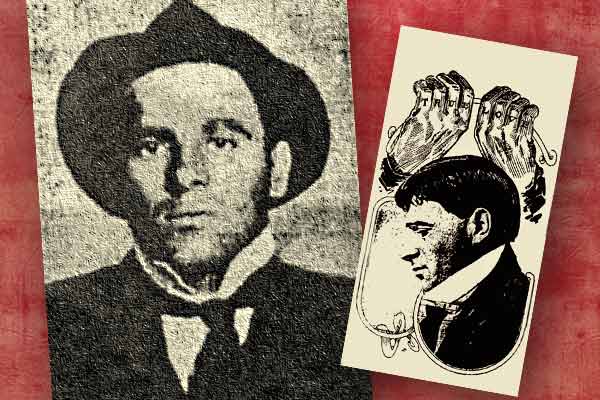 Folks in the Pacific Northwest called Charles Hopkins the “Tattooed Bandit” or “True Love Bandit.” Others knew him as the second Harry Tracy—as if the first one wasn’t bad enough.

Tracy was the hardcase who escaped from the Oregon State Penitentiary in 1902 and killed as many as eight men (including his partner), leading authorities on a huge manhunt before putting a bullet in his own head two months later. Hopkins racked up his own list of victims a dozen years later.

Hopkins said he was born in England in 1888, under a different name, and that he ran away to sea when he was nine. He fell head over heels for the captain’s daughter, indelibly demonstrating his affection for her by tattooing “True Love” on his fingers.

After settling in Wisconsin, Tracy’s home state, Hopkins wandered West. He was arrested in Ellensburg, Washington, in 1909 for burglary. He served four years of a 14-year sentence, then went to Canada, where his crimes there got him kicked out of the country. Hopkins landed in Seattle, Washington, and his story turned bloody.

He robbed and fatally beat a visiting Englishman on February 5, 1914. A cop attempted to arrest Hopkins and another youth in Everett on March 26. Hopkins grabbed the officer’s gun and shot him and two bystanders. One bystander died.

The next day, Hopkins robbed a sawmill in North Everett. On March 28, he held up and shot two loggers. One died, while the second victim identified the assailant.

Hopkins hid out at various farmhouses, demanding food and avoiding posses—just as Tracy had done in 1902. The manhunt grew, fueled by a $500 dead or alive reward, and reportedly was the largest since the Tracy search.

On March 31, the Concrete city marshal acted on a tip and arrested Hopkins while he was asleep in a rooming house in Van Horn. Placed in the Skagit County Jail, Hopkins passed his time by writing poems for sale—60 cents for long form, a quarter for a sonnet—which he advertised outside his cell. He also tried to make a fake gun, but officers foiled that escape plot.

On June 12, Hopkins’s trial for the logger’s murder began. Three days later, after 26 minutes deliberating, the jury found Hopkins guilty. Sentenced to life in prison, he threatened the prosecutor: “I’ll get you for this.”

In one sense, the killer was lucky. Washington had abolished the death penalty the year before. But Hopkins never got out, dying in prison in 1948 at the age of 60. One of his poems summed up his defiance, even as he faced a lifetime behind bars: “So here I am, and here I’ll stay, maybe ’till judgment day. But discouraged, ‘not,’ undaunted, ‘not at all,’ I still retain that stuff called ‘gall.’”

As far as we know, Hopkins, the second Tracy, never got paid for those words.