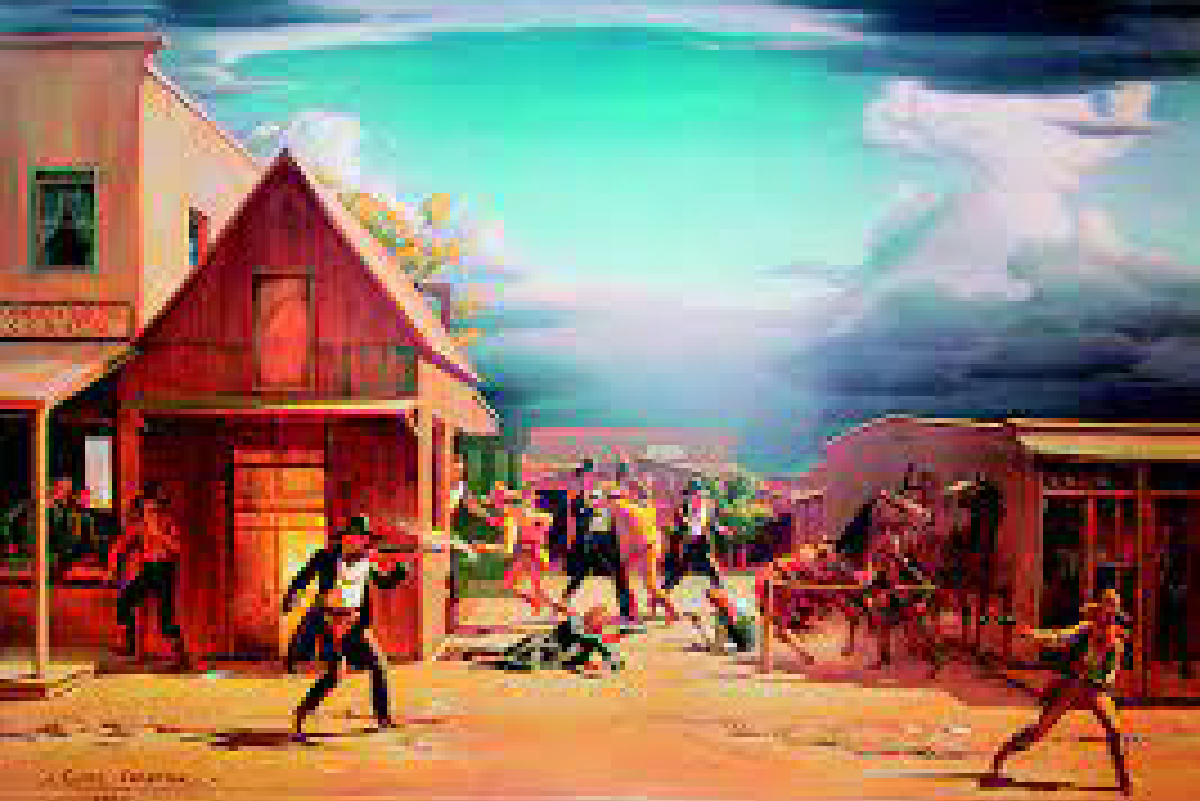 There had been tension between the Earp’s and the Cow-boys for several months but it was Ike Clanton’s big mouth that caused of all the trouble that day. On the morning of October 26th, 1881, he was all liquored up, going around town and making threats to kill the Earp’s and Holliday. Tombstone town marshal Virgil Earp was aware of his threats and had enough of Ike’s talk. He cracked him across the skull with his pistol, then drug him off to police court where Ike was fined $27.50 for carrying a gun.

After a heated exchange of words on the sidewalk Wyatt then whacked Tom McLaury with the barrel of his pistol. When Billy Clanton and Frank McLaury arrived in town and learned what happened to their brothers they were on the warpath and ready to take on the Earp’s. The Cow-boys were gathered on Fremont Street near Fly’s Photograph Gallery and the Harwood house when the Earp brothers and Doc Holliday approached to arrest them for violating the town’s gun ordinance, a misdemeanor.

Earlier, Virgil had borrowed a Wells Fargo shotgun but not wanting to appear aggressive, he took Doc’s cane and handed the gun to Doc and told him to conceal it under his coat. As the Earp’s and Holliday approached Sheriff John Behan told them he had disarmed the Cow-boys. Actually, Behan had approached the Cow-boys and told them they must surrender their guns but Frank McLaury replied the Earp’s must also disarm. Even Behan knew that for him to disarm sworn officers of the law was something he couldn’t do.

Believing the Cow-boys were disarmed, Wyatt put his pistol back in his overcoat pocket and Virgil stuck his back into his pants on his left hip and held the walking stick in his right hand. Moments later, however, they saw that Frank and Billy were armed. Apparently, Tom McLaury was unarmed, however, a witness later claimed he had a pistol. A rifle was in easy reach in a scabbard on Frank’s horse. It’s worth noting that Tom had checked his pistol at the Crystal Saloon and if the boys were leaving town as was later claimed it seems likely he would have retrieved it. But no firearm was found on his body after the fight. Still, during the confusion that followed the gunfight, it’s possible one of the Cow-boys friends could have taken it.

The two sides were about 15 paces apart when Virgil shouted “Boys throw up your hands. I intend to disarm you!”

It appears at this point that both sides misinterpreted the intentions of the other.

“We will” Frank McLaury replied but did not raise his hands, reaching for his pistol instead. Billy Clanton also reached for his weapon. Tom McLaury, instead of raising his hands opened his coat; either to show he was unarmed or something that could be interpreted as reaching for a gun. Friends of the Cow-boys would later claim at the hearings the three had raised their hands. However, forensics and other witnesses would prove otherwise. Virgil would later say he saw Billy and Frank reach for their pistols and heard a “click-click.” That was probably Doc cocking the twin hammers on his shotgun.

Wyatt, seeing Frank and Billy reach for their guns, pulled his pistol from his pocket of his overcoat and fired at Frank, hitting him in the stomach. Wyatt would later say he knew Frank was the biggest threat of the two. Billy, in his haste, fired and missed. Two shots fired at almost the same time. So, the first two shots were fired by Wyatt and Billy. Wyatt and other eyewitnesses testified to that.

Ike ran up to Wyatt trying to grab his pistol. Inadvertently, he probably saved Wyatt’s life by shielding him from Billy’s line of fire. Wyatt brushed him aside, saying “The fight’s commenced. Go to fighting or get away.”  Ike turned ran into Fly’s Boarding House and all the way to Kellogg’s Saloon on Toughnut Street. Billy Claiborne and West Fuller both turned tail and fled.

After those first two shots there was a momentary pause, before, to quote Ike, “the ball opened.”

Though wounded, Frank fired at Virgil hitting him in his right calf, dropping him to the ground. Morgan Earp drew a bead in Billy Clanton and put a bullet in his chest.

Virgil got back on his feet and fired one shot at Frank and three at Billy. A shot from one of the Cow-boys hit Morgan in the shoulder. The bullet went through his back, clipping a vertebra and barely missing his spine, coming out through the opposite shoulder. He called to his brother, “I’m hit,” and fell to the ground. He quickly rose to his feet and stumbled over a mound of dirt next a ditch that had been dug for some new water pipes.

Doc raised his shotgun and cut loose at Tom McLaury, who was standing behind Frank’s horse. Tom was hit in the side while struggling with the startled horse either trying to fire his pistol or to get a rifle out of the scabbard. The frightened horse broke loose exposing him to Doc’s shotgun.  He staggered into the street and died. Doc then threw down the shotgun and pulled his pistol.

Was Tom McLaury unarmed? The Earp’s believed Morgan was shot by him. Wyatt would later say that the father of one of the Cow-boys, West Fuller, took Tom’s pistol off him during the confusion following the fight. An eyewitness also claimed Tom was armed.

Although he was mortally wounded, Frank was still full of fight. He grabbed his horses’ reins and moved into Fremont Street. He fired a shot at Morgan, but his horse broke loose leaving him with no cover. As Doc closed in Frank aimed his pistol at him saying, “I’ve got you now.”

Doc replied, “Blaze away! You’re a daisy if you do.” Frank fired a round that grazed Doc’s hip. Morgan and Doc both fired hitting Frank in the head and the chest.

Billy was hit in the wrist, stomach and the chest. He was leaning against a wall of the Harwood house. He too was mortally wounded but still trying to re-load his pistol when photographer C.S. Fly took pistol from him.

Frank and Billy were gamers until the end of the fight.

Wyatt was the only combatant in the Earp party who emerged from the fight unscathed. Virgil was hit in the leg. Doc was grazed and Morgan was the most seriously wounded.

The gunfight lasted about thirty seconds and some thirty gunshots were fired.       There was much confusion and later no one could agree on the exact details, but one thing seems clear, neither side expected things to go this far.

In the aftermath, Behan attempted to arrest Wyatt while he was attending to his wounded brothers. “I won’t be arrested.” He replied defiantly. “You deceived me Johnny, you told me they were not armed. I won’t be arrested. I am here to answer for what I’ve done. I am not going to leave town.”

Behan could do nothing but back down, especially when Sylvester Comstock, an attorney and leader of the Tombstone Democratic Party stepped forward saying, “There is no hurry in arresting this man. He done just right in killing them and the people will uphold them.”

Ike surrendered to Behan and he was locked in a jail cell. Ten guards for his own protection when word spread that a mob had gathered with intentions of lynching.

For a short time the citizens of Tombstone were backing the Earp’s. The citizens were tired of the lawless acts on the part of the Cow-boys. The whistles at the Vizina mill brought dozens of armed vigilantes to protect the town from the wrath of vengeful Cow-boys.

All that was about to change.