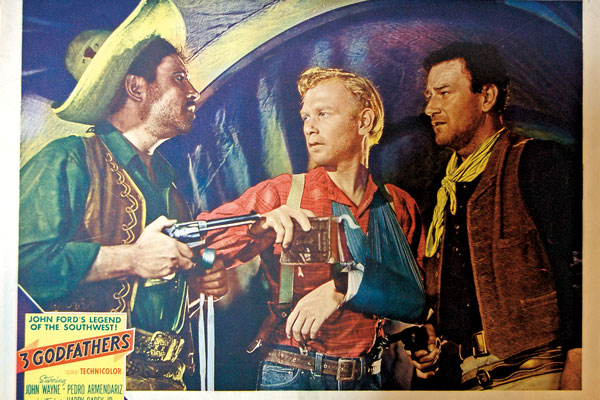 To put myself in the Christmas frame of mind, I plug in a DVD of my favorite holiday movie. But before you get the wrong idea, I’m not shouting “Zuzu’s petals!” and bawling at the end of It’s a Wonderful Life or singing along with Bing Crosby in White Christmas.

For true holiday cheer, watch the Hell’s Heroes version, starring Charles Bickford, Raymond Hatton and Fred Kohler as three hardened bank robbers who find redemption in the desert after coming across a dying woman about to give birth. The bad men promise to save her baby.

Filmed in 1929 and released in January 1930, Hell’s Heroes was directed by William Wyler. It is dark. It is raw. Bickford’s character is practically devoid of compassion. The movie offers nothing sentimental, yet it is full of humanity.

Of course, these films started with a novel, a parable of the Three Wise Men, published in 1913. It’s that classic Western few people have ever read. Kyne would go on to write a number of stories and books—he might be best remembered for his Cappy Ricks stories (few people remember those, either)—but this 95-page book likely got him into the hoity-toity Bohemian Club of San Francisco, California.

The Three Godfathers became a Harry Carey Sr. movie in 1916. John Ford filmed it as Marked Men in 1919, casting Carey in the lead again. Both films are presumed lost.

Those two silents strayed from Kyne’s story, but when Wyler filmed it in 1929 as a Universal “talkie,” he returned to the roots. Four men rob a bank (located in Wickenburg, Arizona, in Kyne’s work). Three make it out of town. The Worst Bad Man, the Wounded Bad Man and the Youngest Bad Man lose their horses, find a dying woman about to give birth, become her baby’s godfathers and strike out for redemption.

Other film versions were still to come. That’s how hot Kyne and Three Godfathers were among audiences.

In 1936, MGM acquired the rights. Too bad. MGM made musicals. MGM made glamour. MGM stars did not sweat. MGM was not known for Westerns. When you cast Chester Morris in a Western, what you get is, well, an uneven, but sometimes intriguing melodrama. The film offers up some laugh-out-loud lines. But who needs that for the holidays?

Then Ford returned to the story, and this is the version movie lovers remember. 3 Godfathers was released in 1948, starring Pedro Armendáriz, Harry Carey Jr. and, of course, Wayne. He is why everyone remembers the film.

“John Wayne overpowers the film,” historian Abraham Hoffman says. “He made it near the peak of his career, which I think ended around 1964, after which he just played John Wayne, apparently not even bothering to change his clothes.”

“Maybe that’s the problem,” True West’s resident film guru C. Courtney Joyner says. “As great as the Ford film is, is it too pretty?”

Hollywood still wasn’t done with the story. A TV movie titled The Godchild aired on ABC in 1974. An episode of Walker, Texas Ranger hit the small screen in 1996. And Japanese director Satoshi Kon put his spin on the tale in Tokyo Godfathers in 2003.

But few folks remember the book.

Too bad. It’s a good holiday story. And Peter B. Kyne never named anyone Zuzu.