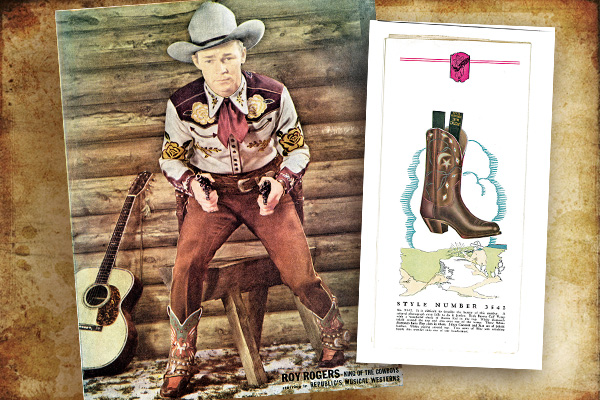 If a picture is worth a thousand words, a picture and an 80-word description were still inadequate for style number 3542, one of Justin Boot Co.’s “handsomest” boots, according to a 1939 catalog.

“Even a colored photograph fails to do it justice,” the anonymous Justin catalog writer noted.

The brown calfskin boot inlaid with white leather diamonds and a crescent-moon-and-star motif in the matching kid shaft is a beauty.

Imagine the sensory overload the writer would have experienced tackling Roy Rogers’ signature Double-Eagle boots. Custom-made for the “King of the Cowboys” by legendary bootmaker to the stars Charlie Garrison, the boots featured stylized eagle inlays and overlaid collars with star cutouts on the front and back shafts; smaller eagle inlays adorned the vamp toes and heel counters. The amazingly intricate boots were meant to make a statement.

While most boots made for working cowboys and cowboy wannabes have been relatively plain cowhide boots, something about all that leather turns a bootmaker into an artist and the boot shaft, in particular, into his canvas. The earliest design on cowboy boots was a lone star on the shafts of boots worn by drovers trailing cattle out of Texas in the 1860s, first sewed in by bootmakers in Coffeyville, Kansas. Later, multiple rows of stitching helped shore up tall tops and keep them from slouching—and became a standard embellishment on even the plainest cowboy boot. The stitching got fancier with each improvement in hand-operated sewing machines for leather; up to six parallel rows of stitching became possible, and floral and feather designs grew in popularity. Today, with the advent of automated stitching, nine rows or more—often in multiple colors—are common in stitch patterns.

Even before the cowboy became the “prince of the plains” and sported boots with stars, eagles and elaborate stitching, boots were decked out with designs. In 1988, two-piece Wellington-style boots were salvaged from the wreck of Arabia, a side-wheel steamboat that sank in the Missouri River in 1856. The boots, which were destined for stores and trading posts farther up the Missouri, feature an embossed gold-leaf harvest motif on a decorative panel attached to the top of the boot shafts.

While fruit and leaves are not common accents on cowboy boots, patriotic themes of eagles and stars continue to resonate among cowboy boot wearers. The bald eagle, of course, is the official national bird, and stars appear on the flags of Texas and the United States. Durango offers both motifs on boots in its current collection—with eagles stitched on one style, and dyed leathers on other designs depicting the Texas Lone Star flag or the Stars and Stripes.

Anymore, you can find factory-made boots to broadcast your patriotism or your devotion to your collegiate alma mater, favorite motorcycle or brand of whiskey. For a little more money—or a lot more money—you can have custom boots made up with a more personal message. Of course, just wearing a pair of cowboy boots already makes a fashion statement, but with the right designs or motifs, your boots can also become vanity plates and say more about you than words ever could.