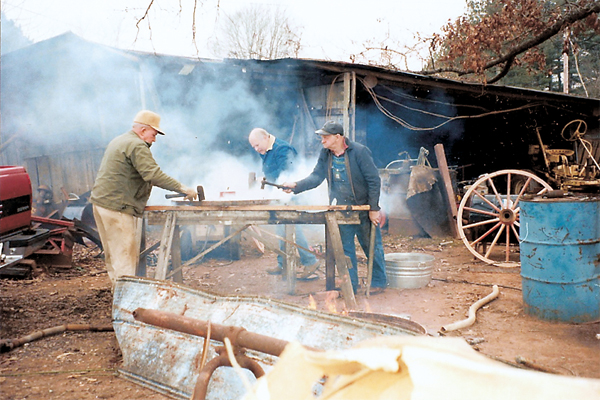 Only one man could be connected with such a tale, and he’s wagon master L.G. McDonald of Waleska, Georgia.

The vehicle was the first L.G. restored for a client 30 years ago. While L.G. had it in his shop, the owner of the transport got into a gunfight over a woman and was killed. The vehicle L.G. was restoring turned out to be rather fitting for this turn of events. It was a hearse.

But most people don’t come to the wagon master looking for a conveyance for their remains. Old West aficionados track down L.G. McDonald because they know he’s an endless source for authentic horse-drawn wagons, buggies and surreys from the 1880-90s.

Buying and selling Western Americana can be a process of
trial and error. “I have a bad habit of seeing what things could be rather than what they are. Sometimes this gets me into big trouble,” he admits.

L.G.’s love of collecting the West began at 14, when he saved up $7.50 so he could buy an 1890s stagecoach trunk, which he taught himself to restore. His first wagon came four years later; he bought the wagon for $50 and sold it for a profit of $25.

At 52, L.G. has spent almost 40 years buying, selling and restoring pieces of Americana. He’s a licensed real estate broker and auctioneer, and conducts monthly antique auctions in Jasper, Georgia. Whenever people have a hankering for 19th-century horse buggies or authentic cowboy furniture, they know they can come to L.G. “If we don’t have it, I can find it,” he assures his customers.

According to club folklore, Edward S. Curtis bartered many of his photographs and photogravure prints with the Rainier Club in Seattle, Washington, in exchange for his club expenses.

Curtis (1868-1952) was a Rainier Club member from 1903-1921, and his original images hang to this day in the club’s stairwells, hallways and meeting rooms. So when Sharon and Maury Floathe were discussing ideas for a fund-raising project during the 2004 centennial celebration of the Rainier Club’s clubhouse, their eyes settled on Curtis’ beautiful photographs.

The couple brainstormed and decided to produce limited-edition lithographs that faithfully match the size, color and detail of Curtis’ original photogravures. In addition, they printed Curtis’ images on note cards, bookmarks and art calendars with images on one side so that customers could trim and mount their favorite prints at the close of the year. The profits of these sales are earmarked to benefit a local domestic violence organization, the Duwamish Tribe and other Native American causes, and the club’s historical clubhouse preservation society.

In 2004, Sharon and Maury published their first 20 images for the project. They added 30 more images in December 2005.

These lithographs are unique compared to other Curtis repro-ductions. “Giclée (high-end inkjet) printing is often used by artists to match their original works. The problem we’ve observed with Curtis’ images is that the giclée operators apparently do not have access to his original photogravures,” Maury says, adding that the scarcity and high cost of Curtis’ originals are usually the hurdles to producing accurate color reprints of his work. The Floathes used Curtis’ 1914 photo-gravures for their project.

Extensive pre-press work on the images, several rounds of color proofs and printing on a multi-million dollar press have resulted in lithographs that are suitable for framing. The lithos truly pay homage to Curtis’ vision of native life prior to contact with the Europeans.