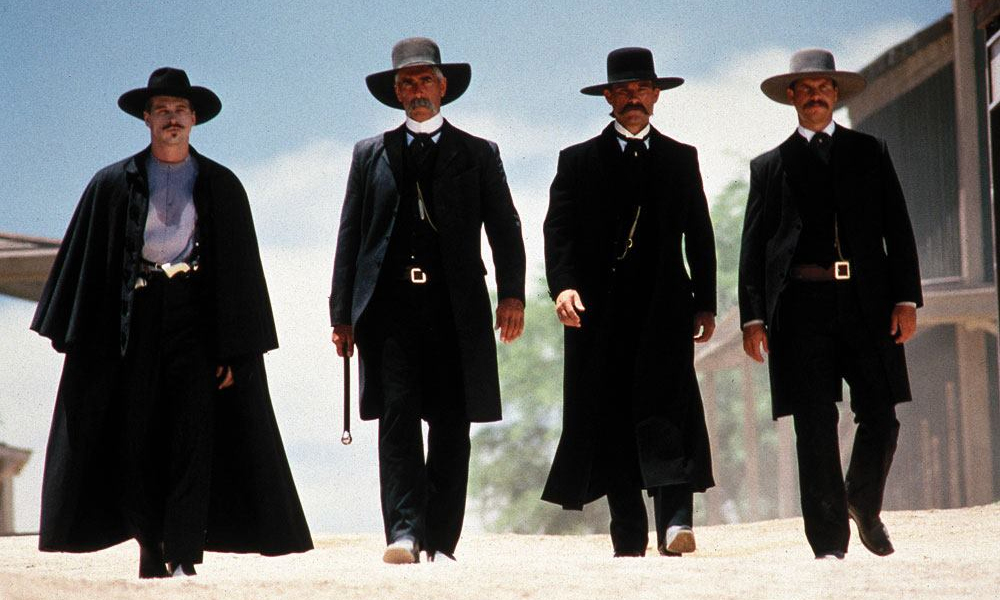 It was the most famous stroll in American history. Neither fast nor slow. Purposeful, with a sense of intimidation. It has been memorialized on film numerous times and repeated in the minds of nearly every visitor who has traipsed the streets of Tombstone. The same will hold true today and tomorrow as new Westerners follow the footsteps of Dr. John Henry Holliday and the Earp brothers on the board planks that lead to the street outside the O.K. Corral.

Night Before the Nightmare

As Ike Clanton seethed, Wyatt Earp slept. And so did his brother Virgil and Dr. John Henry Holliday.

They had all stayed up quite late; Virgil playing poker, and Wyatt overseeing the growing rage between Ike and Holliday. The Earps thought they had mollified the situation by the time they crawled under the sheets in their respective homes near the corner of First and Fremont.

Ike walked the streets of Tombstone on that fateful morning of October 26, 1881, telling just about anyone who would listen that he planned to cause trouble. “He said that as soon as the Earps and Doc Holliday showed themselves on the street, the ball would open, and they would have to fight,” bartender Ned Boyle said.

Ike went near the boarding house where Holliday and his love interest, Kate Elder, lay sleeping. Clanton again made threats, and proprietor Mary Fly banged on the door. Kate answered to hear Fly say, “Ike Clanton was here looking for [Holliday], and he had a rifle with him.”

Kate awoke Doc, who told Kate, “If God will let me live to get my clothes on, he will see me.”

The Earp brothers had not taken Ike seriously enough to get out of bed, but the intensity of the situation continued to grow as that cold morning progressed toward noon. When they finally left their beds, they would not sleep easily again for a long, long time.

“I sat down in [the Occidental] saloon and played poker all night, until daylight. Tom Corrigan was tending bar there in that saloon. Virgil Earp and Tom McLaury and another gentleman, I don’t know his name, and Johnny Behan, were playing the game….When the poker game broke up in the morning at daylight, I saw Virgil take his six-shooter out of his lap and stick it in his pants. I got up and followed him out of doors on the sidewalk. He was going down Allen Street towards the Cosmopolitan Hotel. I walked up to him and told him in regard [to]…playing poker with a six-shooter in his lap, that I thought he stood in with those parties that tried to murder me the night before.”

A Most Damning Witness

At face value, Martha J. King provided perhaps the most cruelly damning testimony presented against the Earps. It was succinct and powerful.

A housewife stopping at the Union Meat Market, she had heard the rumors of impending trouble. She dashed to the front of the store, near the folding front door, as the Earp party passed, just in time to hear someone utter the words:

Mrs. King then darted toward the back of the meat market and heard gunshots ring out.

The only member of the Earp party she recognized was Holliday. She had shared a stagecoach ride with his paramour, Kate Harony, a few weeks earlier, so we can suppose she was aware of Kate’s love interest.

Her testimony at the Spicer Hearing portrayed one of the Earp party instructing Holliday to blast away the cowboys. More than a century later, her statement is still chilling to read, as it seems to indicate prior intent for murder.

But what did the words she heard mean? The statement seemed to indicate an immediate barrage of bullets would have occurred. Yet the Earp party did not reach the vacant lot, a few steps away, and “Let them have it.” Rather, Marshal Virgil Earp demanded the cowboys surrender their weapons and exchanged words with them before exchanging gunfire. So the words from an unidentified Earp certainly could not have been instructions for a slaughter.

More likely, she had heard a snippet of a conversation. Perhaps, “If Behan wants the shotgun, let ’em have it,” or some such other innocuous comment. It could even have been something to the effect of, “If they draw their pistols, let ’em have it.” Even that would not have shown prior intent for murder, as indicated by King’s testimony.

Yet the woman heard what she heard, and her testimony has incited a debate that has lasted throughout history.

If you want to talk baseball with Casey Tefertiller, he can certainly wow you (he wrote about baseball for The San Francisco Examiner and coauthored Mental Toughness: Baseball’s Winning Edge). In our arena, he is a designated hitter for Wyatt Earp and is the author of the critically-acclaimed Wyatt Earp: The Life Behind the Legend. He also discussed the influence of Walter Noble Burns’s Tombstone book on the legend of Earp in the foreword for the 1999 edition.