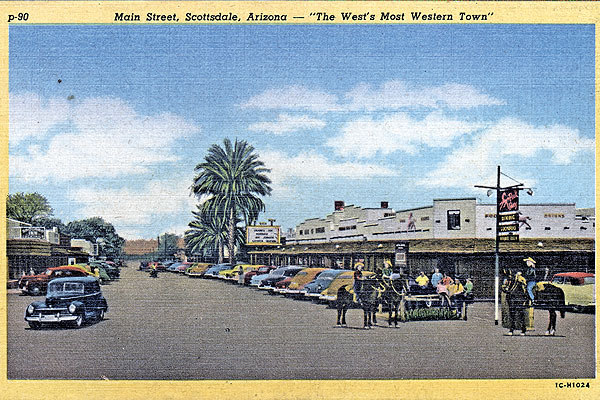 In Arizona’s high noon showdown over the brand the “West’s Most Western Town,” Scottsdale Mayor Jim Lane and Cave Creek Mayor Vincent Francia faced off with their hands on their holsters.

Since 1947, Scottsdale has proudly worn the title—displaying it in advertising to tourists and new businesses, and at dozens of its Western-themed events. The town even installed a beautiful Ed Mell statue of a bucking horse with a rider holding on for dear life as the centerpiece on Main Street. When Scottsdale says, “Our brand isn’t for sale,” you know the town is not joshin’.

But Cave Creek from up the road thought Scottsdale had outgrown the slogan years ago. Mayor Francia is pretty blunt about why: “Scottsdale is all hat and no cattle.”

True West even had a dog in the fight—two dogs, actually, when The Arizona Republic asked Executive Editor Bob Boze Bell and columnist Marshall Trimble (also Arizona’s official historian) to sound off.

Cave Creek resident Bell has long been suspicious of Scottsdale’s claim and considers Scottsdale the “West’s Most Midwestern Town.”

Scottsdale resident Trimble gently admonished: “I like ya, Cave Creek, but you’re going to have to get creative and come up with a motto of your own. You can’t have ours.”

Scottsdale’s Mayor Lane agrees: “It’s really a one-sided fight—we’re not participating, because we’re not giving up our motto.”

“We own that title,” he says. “We’re not living in the 1870s anymore, with hitched horses, but we have a great Western flare. We’ve got the hospitality and spirit of the West. We’re not doing pig races and quick draw contests on the street, but that’s not what makes a Western town.”

Scottsdale, which officially trademarked the motto in 2007, even threatened to go to court to get Cave Creek off its back.

“We still live the Western lifestyle,” Francia says. “We still have horses hitched up and a cowboy culture that’s alive and well; we’ve got one of the largest equestrian populations in the state and hundreds of trails. Scottsdale once was a Western town, but it’s evolved into something else. Where we hitch horses, they park Porsches.”

In the end, after another successful Wild West Days, Cave Creek decided to give up the (unwinnable) fight with Scottsdale and do just what Trimble had suggested: come up with its own slogan.

Cave Creek is now “Where the Wild West Lives,” just up the road from Scottsdale, the “West’s Most Western Town.”

Like any admirable Old West Savior, these towns have deemed the West as a way of life worth fighting over.