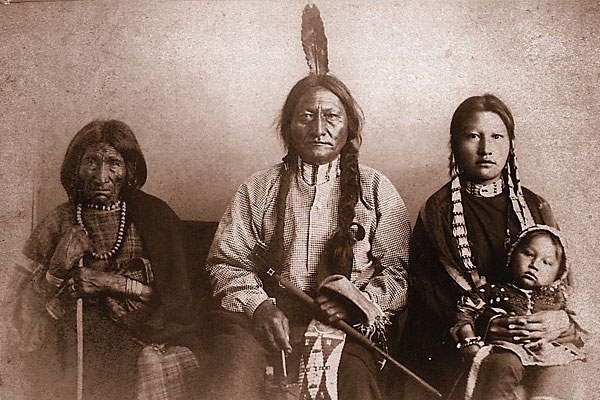 They were the leaders of the Indians, whether they conducted war with their traditional enemies, resisted the European invasion, practiced spiritual beliefs or searched constantly for food and shelter and survival. Some achieved their status through heritage. Others, because of repeated acts of bravery or strength of character. And there were those who were strongest in their spiritual powers.

The chiefs remembered today are generally those who were either bitter fighters against the white man or those who recognized that resistance was useless and destructive, and used their influence to end the conflicts. They won many battles, but it was inevitable that they would lose the wars and their land.

All of the scores of tribes across the West had their chiefs, but none had just one leader. Most tribes were split into numerous factions or bands, each with their own leaders. And different chiefs within one tribe or sub-tribe were recognized by their people for various strengths and responsibilities. There was no “United Tribes of America” with a single leader and spokesman. Failure of settlers to understand Indian leadership division contributed to the failure of many treaties.

Depicted in their traditional clothing and with their handmade accessories and weapons, Indians are among the most interesting and attractive subjects of all photographs. The images of the most prominent chiefs are no exception. Here follows just a few of the great ones. The names familiar today are the English versions of their native names. Unfortunately, some of the greatest chiefs, such as Cochise (Apache) and Crazy Horse (Sioux), left no photographs of themselves.