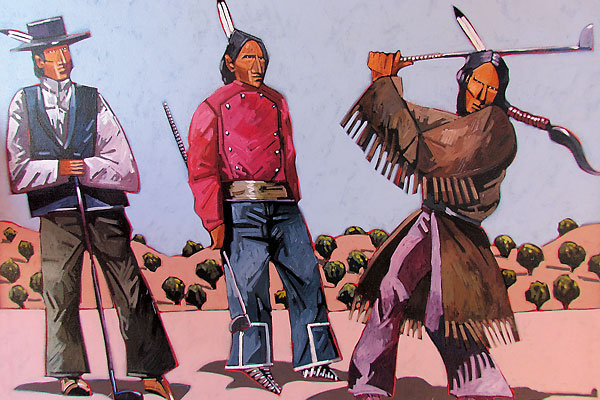 “I had a cowboy who came to one of my shows and exclaimed, ‘This isn’t Western art!’” Thom Ross says.

“And every painting was of Billy the Kid, Doc Holliday or Butch Cassidy.But because it wasn’t just like all the other crap he had been told was Western art, it followed, in his mind, that therefore this just could not be Western art.”

These reactions frustrate the abstract Western artist. In Ross’s mind, Western artists of today are merely reproducing clichés that sell instead of getting to the root of why the West means so much to people, which is where the art truly comes to life. “Is this the right gun, is this the right uniform, is this the right time of day?” Ross mimics these other artists. “Being a slave to these conditions reduces your ability to interpret history. They reproduce it; they are not interpreting it.”

Ross believes an understanding of the West is best achieved when the artist liberates his mind to see truth and imagination together. “I have photos of Indians playing golf and ping-pong,” Ross says. “I have eyewitness accounts of Indians playing baseball and croquet. Yet when I paint Indians doing these exact same things, I am called either a nut or a racist; yet I am telling a truth.”

His quest to portray accurate images stems from a childhood of growing up watching Bonanza and Rawhide on television, which left him thinking the events were taking place at that very point in time, rather than actually being myths filmed on sound stages. “I thought I was living in the East because I had never seen a gunfight or a massacre or even a hanging!” he says. “I thought I was missing it all, never knowing that what these shows were talking about had already come and gone!”

As an artist, Ross underwent a transformation on the anniversary of Custer’s Last Stand, while visiting the monument in 1976. “From this came my understanding of the duality of life, the two-sided coin….” Ross says. “This is when the myth transcends the truth, and that can be dangerous. It was from this recognition that I began my pursuit, as an artist, to try and embrace and present the duality of history-myth.”

Since that day, not only has Ross continued to visually share the truth, but he also speaks it as well, which can sometimes lead to him getting kicked out of every Seattle bar that he loves.

“Seattle is a liberal city, and often when I am in a bar or out at dinner and the conversation turns to history, I feel obliged to voice what it is I know,” Ross explains. “It is actually stunning to hear what it is that people really believe. So I get boisterous and then am asked to leave ‘and don’t ever come back!’”

However, just like Gen. George Custer, Thom Ross will continue to fight his critics until his very own last stand.