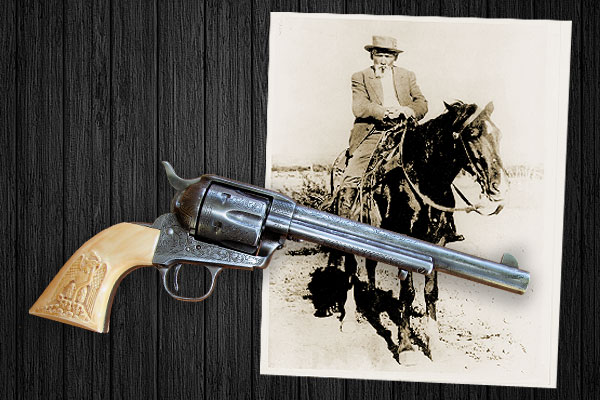 While most firearms enthusiasts appreciate a vintage gun showing its original finish, a certain beauty can be found in those well-worn guns whose original color has been shed through the decades and replaced by an iron gray finish that evokes thoughts and images of the past.

Some of these guns conjure up visions of hard use and wild times on the American frontier.

A timeworn gun—especially one with engraving—evokes romantic, historical images in my mind. It has the aura of those famed engraved arms used by the likes of Theodore Roosevelt,  Wes Hardin,  Wild Bill Hickok  and Texas John Slaughter.

Today’s shooters are lucky to have the option of choosing from an array of quality replicas of these firearms. Yet as beautiful as they are in their shiny new finishes, many of them look like new guns. As one who has admired and handled untold numbers of historical arms, I’ve come to expect most vintage firearms to have an aged look, devoid of much of their original protective finish. That quality is one of the reasons that several of Cimarron Firearms’s original finish antiqued engraved guns occupy a special place in my personal collection.

This Fredericksburg, Texas-based outfit  was the first to offer these old-looking, brand new replicas—in plain or engraved versions. Cimarron stocks a variety of models of its replicas in antiqued finish from the percussion Colt  and Remington replicas  to metallic-cartridge six-shooters  to cartridge long guns like the 1860 Henry rifle copies and others.

To properly create the antiqued look, each hand-engraved gun is adorned in its period style. Percussion revolvers are embellished in the New York or Nimschke style of their era, while the metallic cartridge six-guns, like the Cattleman single actions, known as the Cimarron Model P, are decorated in the later style of famed engraver Cuno Helfricht. Rifles are engraved in the correct period style, such as Helfricht or Nimschke. Then each arm is blued and color casehardened (if appropriate), as though it were going to leave the factory as a “newly finished” firearm. Next, each arm is treated with an acid etching that gives it a gray, aged appearance, with traces of color remaining in those out-of-the-way places. Upon completion of this process, the acid is then neutralized to stop further aging. To add a worn look, every gun is tumbled in a special container, filled with an assortment of other objects. Finally, some hand aging gives each arm that “used, but not abused” appearance.

The result is a firearm that looks like it has a history—well-used, but cared for. Internally, it is as perfect as any other factory new arm, since the insides are not aged in any way, yet on the outside, the gun has gained a distinctive vintage character.

Take it from me, when antiqued correctly, each firearm looks like an original and the engraving adds that extra bit of class and character befitting a vintage firearm.

Phil Spangenberger writes for Guns & Ammo, appears on the History Channel and is True West’s Firearms Editor. As a fan of Cimarron Firearms, he has appeared on the company’s testimonial page, but he is not sponsored by the company.