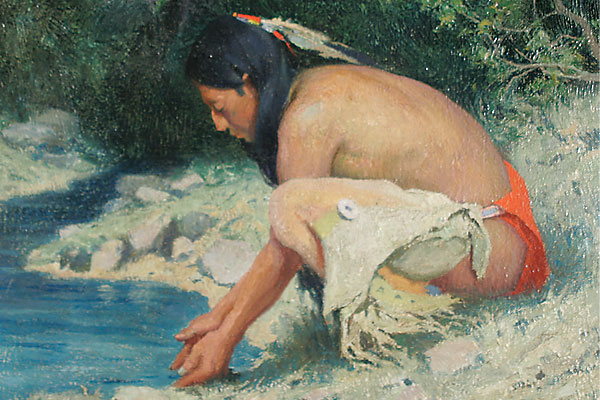 For Eanger I. Couse, life seemed to begin in 1887. He found romance and learned of a place from which his future work would gain its most notoriety.

While studying at the Académie Julian in Paris, Couse had the good fortune of meeting Virginia Walker, a ranch girl from Washington who was studying illustration herself. Their romance would turn into a Parisian wedding in 1889. She convinced her husband to live for a year on her family’s ranch, where Couse painted his first major Indian art: “The Captive,” based on the 1847 Whitman Massacre. His wife and a local Klikitat Indian served as his models. That painting, first shown at the Paris Salon in 1892, now hangs in Arizona’s Phoenix Art Museum.

Couse also met another artist at the Académie Julian: Joseph Henry Sharp, who raved about Taos, New Mexico. Couse wouldn’t begin spending summers there until 1902, but thanks to Sharp, he’d become a founding member of the influential Taos Society of Artists in 1912 and even served as the first president.

It’s fitting then that the top lot at the C.M. Russell Art Auction on March 14-18 in Great Falls, Montana, was a painting by Sharp, the spiritual leader who brought together the members of the Taos artist group, followed by a painting by a man he introduced to Taos: Couse.

The auction set a new record of more than $2.1 million in bids.

The top Russell lot was sold at the C.M. Russell Art Auction. “First American News Writer” (below) for $80,000. The 1910 drawing is traced back to Sid Willis, the owner of the Mint Saloon in Great Falls. The drawing previously sold at Coeur d’Alene Auction in 2003 for $48,000.

Manitou Auctions, during its March in Montana auction held March 16-17, sold “Pard in Slippers and Pajamas Hastened to Investigate” (bottom) for $9,500.

An artist record for a pen and ink was set at Coeur d’Alene Auction in 2003, “Meeting of Sacajawea and Her Relative of the Shoshone Tribe,” selling for $85,000.