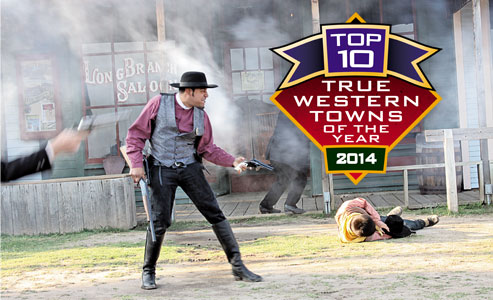 Historic eras come and go. The Era of Good Feelings. The Roaring Twenties. The Gilded Age. None, though, has captured the popular imagination like the Old West.

One reason—among many—is its sheer tangibility. Thanks to the determined efforts of preservationists, historians and a virtual army of enthusiasts and volunteers, we have: Historic buildings we can walk through. Firearms, tools and furniture we can touch. Firsthand accounts by everyone from sodbusters and cowboys to railroad tycoons and mining magnates we can read. And hoards of glorious photographs of the people and events of the era we can examine and enjoy. We’re proud to recognize each of the following True Western Towns as places that both safeguard and celebrate our Old West heritage.

Maps show Dodge City on the plains of southwestern Kansas.

But in a larger sense the “Queen of the Cow Towns” exists somewhere in the misty borderlands between history and imagination, an icon branded into popular culture as the epitome of the Old West.

Dodge City has been many things over the years: fort, cattle town, railroad center. It was the perfect Old West mash-up of farmers and frontiersmen, rustlers and railroaders, gunslingers and saloon girls, outlaws and lawmen.

And, oh, did it have a reputation.

One visitor, clearly impressed, described Dodge City as “a perfect paradise for gamblers, cut-throats, and girls.”

Another fulminated that: “The employment of many citizens is gambling. [The town’s] virtue is prostitution and her beverage is whisky.”

Perhaps it’s no wonder that men like Doc Holliday, Luke Short, Wyatt Earp and the dapper Bat Masterson all gravitated to Dodge City.

Today the town has nearly two-dozen locally designated landmarks, as well as 11 sites listed on the National Register of Historic Places. And you just gotta love a place that encourages residents to wear their best Western duds on “Cowboy Up Fridays.”

You can sample the Old West at some of the town’s annual events, especially Dodge City Days, a 10-day festival featuring parades, concerts and Western art shows, as well as plenty of rodeo action and the renowned Backyard Barbecue Contest.

Sidewalk medallions and statues on the Trail of Fame commemorate many of the town’s most famous characters, both real and fictional. (You’ll remember many from Gunsmoke.) The self-guided tours begin on Wyatt Earp Boulevard.

The Boot Hill Museum illustrates local history with thousands of artifacts, photos and documents. The “Guns That Won the West” exhibit is a perpetual favorite.

Although Dodge City had a reputation as a dirty, drunken cowtown, it had a refined side, too. The Hardesty House, a beautifully restored Victorian home built in 1879, shows how some of the town’s well-to-do residents lived.

Even with all its successes, this venerable town founded in 1872 isn’t resting on its laurels. A statue of Doc Holliday has been commissioned for the Trail of Fame, and city officials are working with the National Park Service to develop the Great Western Cattle Trail.

For Dodge City’s inspired and enduring efforts to preserve its heritage, we take great delight in honoring Dodge City as our Top True Western Town of 2014.