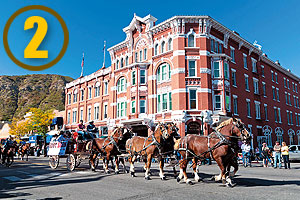 Gold may have attracted prospectors to the San Juan Mountains, but the railroads ensured Durango’s future.

Established in 1880 by the Denver & Rio Grande Western Railroad as a center for mining, agriculture and cattle interests, Durango preserves and protects all aspects of its Western heritage.

No visit is complete without a ride aboard the historic, steam-powered Durango-Silverton Railroad. The 45-mile ride through the breathtaking beauty of the San Juan Mountains has delighted generations of tourists.

The Durango & Silverton Narrow Gauge Railroad Museum holds a fascinating array of exhibits, including an 800-square-foot  scale model railroad, and a baggage car used in the classic Western Butch Cassidy and the Sundance Kid.

It’s really no wonder Durango has received so many awards for preserving the spirit of the Old West over the years. Every year some of the town’s historically minded outfits—the Center of Southwest Studies, Henry Strater Theatre and Durango Arts Center, among many others—present exhibits and programs on the town’s rich Western history.

The 1904 Animas City School Building now holds the Animas Museum, which offers programs and exhibits for all ages. You’ll find the town’s research library and photo archives there, too.

The Strater Hotel, Durango’s finest Victorian structure, was built in 1887. It is still noted for its gracious amenities, with antique furnishings in every room.

Durango’s history lives on in the town’s many heritage events, such as the True West Railfest, the Durango Cowboy Poetry Gathering, the Bar D Chuckwagon Suppers, Durango Fiesta Days and many rodeos.