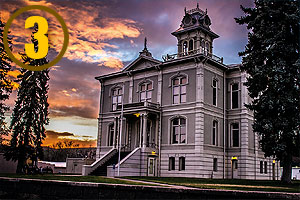 The intrepid explorers camped on the banks of Patit Creek, just east of modern-day Dayton, in 1806, during the return leg of their historic journey. Local lore has it that several nearby Indian tribes once used what is now Main Street as racing grounds.

The town today boasts an impressive number of historic structures.

Dayton has three historic districts, each noted for its architecture. Between 1880 and 1910 many of the town’s more prosperous citizens built their homes and commercial buildings in a remarkable variety of styles—Queen Anne, Italianate, Gothic and Craftsman. Today 90 of those buildings are on the National Register of Historic Places.

But the town’s most notable building is the Dayton Depot, the oldest in the state. It was built in 1881 for passengers on the Oregon Railway & Navigation Company line. In 1899 it was moved (using roller logs, horses and a winch) to Dayton’s booming downtown area.

The depot closed in 1972, but reopened to the public in 1981 as a museum. Not surprisingly, it is listed on the Local, State and National Registers of Historic Places.

Dayton also has Washington’s oldest working county courthouse, built in 1887. It has been carefully restored to its original splendor.

The historic county seat honors its past with an assortment of walking tours, annual festivals, home tours and ongoing preservation and restoration projects.

The Historic Dayton Pathway in the heart of town takes visitors by the depot, as well as Caboose Park, Smith Hollow School and a striking bronze statue of Sacagawea.

The 37-acre Lewis & Clark Trail State Park stands a few miles west of Dayton along the Touchet River. When Lewis and Clark passed through this site in 1806, they commented on its unusual vegetation-—an old-growth forest surrounded by arid grasslands. The park is situated on the historic Nimipooiskit Trail that runs from the Rocky Mountains to the Pacific Ocean. A few remnants of the trail can still be seen near the park.