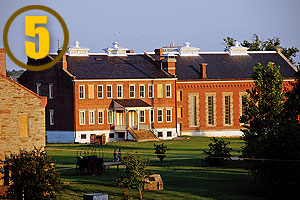 The federal court at Fort Smith was charged with keeping the peace in the Indian Territory, a vast and untamed land where many of the Old West’s most famous lawmen and notorious outlaws crossed paths.

But that thankless task is what makes Fort Smith so revered by history buffs and attractive to tourists today.

A good place to start a visit is Miss Laura’s Social Club, a former sporting house that now serves as the town’s official visitors center. The gracious, two-story Victorian “hotel” was the first brothel to be listed on the National Register of Historic Places.

Check out the “Hell on the Border” jail, a replica gallows, Judge Isaac Parker’s courtroom and a slew of exhibits on outlaws and lawmen at the Fort Smith National Historic Site. Firearms enthusiasts will enjoy the site’s collection of revolvers and rifles, which features one of the legendary 1873 Winchesters, the “gun that won the West.” It also offers exhibits on outlaws like Belle Starr, Bill Doolin and Cherokee Bill.

The Fort Smith Museum of History, located in the 1907 Atkinson-Williams Warehouse Building, holds the original furnishings of Judge Parker, as well as information on legends such as Deputy U.S. Marshal Bass Reeves. The museum also hosts special events like the “Saturday Strolls” with Judge and Mrs. Parker, re-enactors who take visitors on a short walk of the area while discussing its history.

Fund raising efforts continue for the U.S. Marshals Museum. When complete, the museum will feature a Hall of Honor to recognize all the U.S. marshals, deputy marshals and special deputies killed in the line of duty. The museum will also display many artifacts associated with some of the greatest lawmen of the Old West, men like Bill Tilghman, Chris Madsen and Heck Thomas.