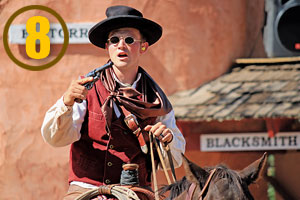 When Spanish pioneers settled in the fertile valley of the Rio Bonito in 1849, they named their community La Placita.

But around 1869, the name was changed to Lincoln.

Less than a decade later, the town became the center of the Lincoln County War, a bloody conflict over the economic and political control of Lincoln County, at the time the largest county in the United States.

It all started—at least the shooting part of it—when partisans shot John Tunstall, a wealthy, 24-year-old businessman, in the head on February 18, 1878.

By September, things had spiraled so far out of control that President Rutherford B. Hayes removed the corrupt Samuel Axtell from the New Mexico Territory governor’s office and appointed Lew Wallace (a Civil War general who later wrote Ben-Hur) in his stead.

Eventually Wallace proclaimed an amnesty for all those involved in the Lincoln County War, as long as they weren’t already under indictment. The proclamation did not include Billy the Kid.

Lincoln today is a beautifully preserved monument to that chaotic period of New Mexico’s history.

The town boasts five museums, each housed within historic buildings and operated together as the Lincoln Historic Site. It includes 17 structures and outbuildings and is the most popular state monument in New Mexico, with up to 40,000 visitors a year.

The Anderson-Freeman Museum features exhibits in a timeline starting with the original Indian occupation of the region.

Learn more about the War at the Old Lincoln County Courthouse, used at one time or another as a private home, Masonic Lodge, store and jail.

You’ll also want to check out the Dr. Woods House, the village’s defensive rock tower (the Torreon), the San Juan Church and the Montaño Store.

In the course of a jailbreak in Lincoln, Billy the Kid killed Deputy U.S. Marshal Robert Olinger and Deputy J.W. Bell. When the breakout occurred, Olinger had been eating at the Wortley Hotel. Hence today’s motto: “No guests gunned down in over 100 years.”