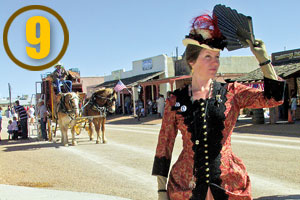 The only thing he’d find in the desolate hills of southern Arizona, they told the mule-headed prospector, would be his own tombstone.

Ol’ Ed had the last laugh, though. His 1877 silver strike led to the establishment of one of the swankest of the Old West’s innumerable boomtowns. Tombstone’s mines produced tens of millions of dollars worth of silver before flooding out in the 1880s.

While silver may have brought people to Tombstone, it’s history that keeps the town alive today. To say the “town too tough to die” is dedicated to its heritage is to absurdly understate the case. Around these parts, it’s the Old West—all day, every day.

Things to put on your must-see list include: The Gunfight Behind the O.K. Corral. Sure, the daily reenactment of the most glorified gang fight in history is kind of touristy. But it’s also a lot of fun, and educational to boot. Tombstone, long a favorite of tourists, as well as a magnet for historians and preservationists, has finally made it as one of Top 10 True Western Towns because of its community’s recommitment to heritage, history and preservation. The town now has an excellent committee of volunteers who host superior annual events in honor of Tombstone’s history and work hard to promote travel and tourism to Tombstone and Cochise County.

The Bird Cage Theatre was once Tombstone’s premier entertainment venue. Visiting today you can practically hear the raucous crowds and visualize the gentlemen and their rent-’em-by-the-hour lady friends in the box seats on either side of the bullet-riddled theatre.

Don’t miss the back room, which the proprietors claim was the site of the longest continuously running poker game in history—eight years, five months and three days.

Boothill Graveyard is a sometimes funny, other times somber, reminder of just how violent and unpredictable life could be in 1880s Tombstone.

The old Tombstone Courthouse, now a member of the Arizona State Parks system, holds a wonderful assortment of artifacts, as well as a replica gallows in the courtyard.

See presses and other equipment used by the longest continuously published newspaper in Arizona at The Tombstone Epitaph Museum. Founded in 1880, The Epitaph still publishes a monthly national edition.