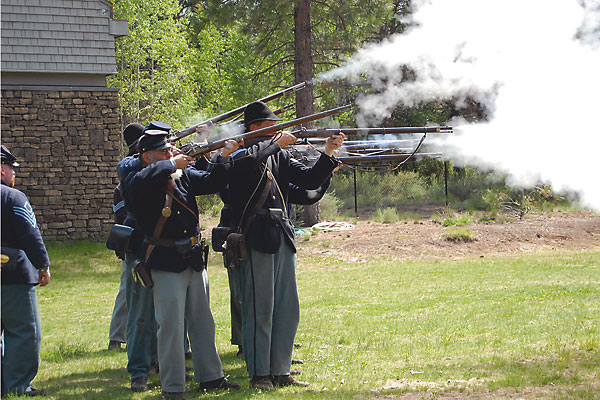 I hadn’t seen lines like this since I tried to get into a bookstore in Dallas, Texas, where actor Jimmy Stewart was autographing copies of his book of poetry. That was like trying to get into a Dallas Cowboys home playoff game.

On May 24-25, 2009, when the New Mexico History Museum opened, visitors waited patiently to check out the exhibits. The line stretched for blocks. Now, granted, admission then was free, but museum officials expected 10,000 visitors over the two-day event. They got 20,658.

This is Santa Fe, New Mexico, where there’s always something going on, and this is a city with no shortage of museums. Yet the popularity of this new history museum still hasn’t slowed down.

In 2000, when the museum was housed at the Palace of the Governors, annual attendance was under 90,000.

It’s never easy to pick the Museum of the Year, but the New Mexico History Museum gets our nod for its efforts in 2009.

This 96,000-square-foot facility— 30,000 designated for exhibit space—is just part of a historic campus that also includes the Palace of the Governors, the 400-year-old seat of Spanish government; the Fray Angélico Chávez History Library; the palace’s photo archives; the Palace Press, which also exhibits the state’s first printing press that arrived via the Santa Fe Trail in 1834; and the Native American Artisans Portal Program, where Indians sit underneath the Palace Avenue portal selling jewelry.

The core exhibit, “Telling New Mexico: Stories from Then and Now,” is as diverse as the culture, and history, of New Mexico. It takes visitors through the native years, into the Spanish Colonial period (maybe the best part of the museum), to the Mexican rule, the Santa Fe Trail, the Mexican-American War, U.S. territorial rule (including the Lincoln County War) and statehood to the present (from the Manhattan Project to the Taos hippie communes).

You have to admire the architecture too, especially the 300 replica, 17th-century arrows hanging from the ceiling in “Telling New Mexico.” The arrows were handcrafted by volunteers from pueblos throughout the state and from Friends of Archaeology, which supports the Museum of New Mexico Foundation of which the New Mexico History Museum is a part.