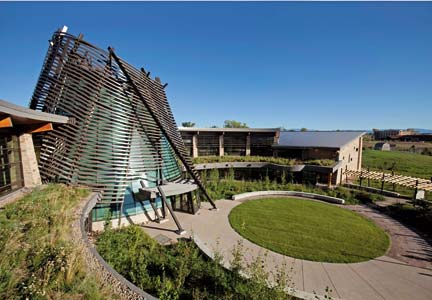 We salute those who think outside that glass display case.

Remember back in those golden days when your folks would force you inside that same old mothball-smelling museum every summer vacation? Really, how many times can you see that Colt .45 that once belonged to Billy the Kid that was given to Sitting Bull by Wild Bill Hickok?

Thank goodness for today’s curators, who believe not only in provenance but also in making history relevant. Exhibits are constantly changing, giving the best museums fresh, inventive takes on history. 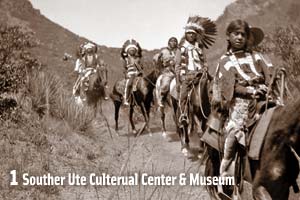 Your first glimpse of the majesty that awaits you starts with the beauty of this parcel of southern Colorado—8½ acres of water features, gardens and hiking trails. You marvel at the design of the 52,000-square-foot building, an architectural wonder designed by Johnpaul Jones. But once you step inside, you will be truly blown away. The museum opened last year after a wait of more than 20 years of designing, planning and construction, and it’s something to behold.

The Welcome Gallery is designed as a massive wickiup, while the permanent gallery vividly explores the history of the Southern Utes. It’s kid-friendly, but both adults and youths will be amazed and educated. Follow that with a wonderful temporary gallery—the first exhibit featured restored and unrestored Indian Motorcycles—and a library and archives, and you’ll come away with a tremendous respect for the Southern Utes of yesterday, today and tomorrow.

Museums, of course, are usually thought of as visual—seeing artifacts, reading about them—but the Southern Ute Cultural Center & Museum also houses a Mac lab of oral records, available for students and researchers seeking to further educate us all about a people known for their horse prowess. 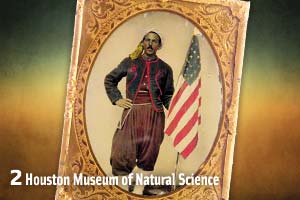 Yes, you’ll find the usual displays of dinosaurs and science, but this gem never forgets history. Last year, “Texas! The Exhibition,” celebrated the 175th anniversary of Texas independence. You bet Davy Crockett, Stephen F. Austin and Jim Bowie were on hand, but so were La Salle, farmers and cowboys. An exhibit this big required help, so the museum partnered with other Texas museums, including the San Jacinto Museum of History and the Dallas Historical Society, but the biggest tip of the Stetson should go to guest curator J.P. Bryan, whose Torch Collection is fabulous.

Egyptian mummies might be the biggest draw for the museum, but it isn’t finished with history. “Discovering the Civil War” opened last year, and “Titanic: The Artifact Exhibition” debuted this year. 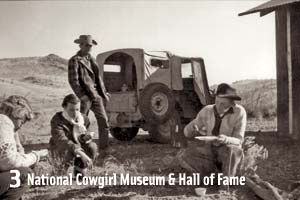 3. National Cowgirl Museum and Hall of Fame (Fort Worth, TX)

Former Supreme Court Justice Sandra Day O’Connor was inducted into the Hall of Fame in 2002. Last year, she got her own exhibit, “The Cowgirl Who Became a Justice: Sandra Day O’Connor: A 30th Anniversary Celebration.” Before that masterpiece, the museum paid tribute to clothing and tack (we’re talking rhinestone chaps and 40-pound dresses in “No Glitz, No Glory” and vintage aprons in “Apron Chronicles: A Patchwork of American Recollections”).

This is an educational museum in more ways than one. During the 2010-11 school year, the museum taught more than 17,000 students from nine states and two foreign countries—more than any other museum or organization in Texas —via 28 distance learning programs. 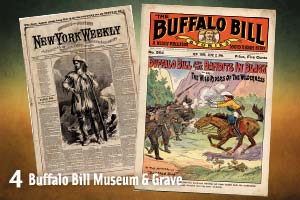 Director Steve Friesen always keeps this museum vibrant. Last year, the museum received its “largest and most valuable donation since its founding,” which included more than 750 Buffalo Bill dime novels, 30 Wild West show programs, more than 100 Wild West postcards and 25 rare books about the West. In fact, you can check out the exhibit “Buffalo Bill Superhero” until January 20. Another important acquisition was an album containing 100 behind-the-scenes Wild West show photographs.

That dime novel donation, by the way, included the first two issues of Ned Buntline’s serialized “Buffalo Bill: The King of Border Men” for the New York Weekly. As Friesen says, “To the best of my knowledge, we are one of only three institutions to have all 12 issues of the story and the only museum that has the first two issues (with Buffalo Bill on one cover and Wild Bill Hickok on the other) on exhibit.” 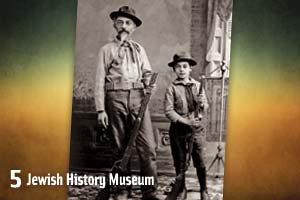 From Sephardic settlers of the 1700s, to later pioneers and all the way to the post-WWII new West, the lectures at the Jewish Storytelling Festival covered this often-overlooked but important piece of Western history. Besides, the annual Ketubah (Wedding) exhibit’s cool too.

But the museum has an even bigger project: scanning, archiving and putting online its collection of more than 10,000 artifacts. One discovery: The 1887 newspaper article by a New York reporter—disguised as a tourist—who didn’t have much nice to say about Tucson, but did say that Arizona should never become a state. 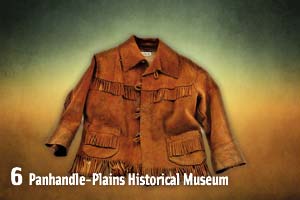 Last year’s exhibits included tracing rodeo on the Southern Plains from its ranch roots to today’s professional action to “Frocks & Togs: Children’s Clothing from 1900 through the 1950s.” This year, the favorite exhibit “Pioneer Town” opens after a remodeling job.

The sprawling facility includes a research center and art shows, but the new Pioneer Town should lift this museum even higher, detailing life from 1890 to 1910. “Everyday life was the same, but how we accomplish daily tasks—with technology and tools—are different today,” project manager Becky Livingston says. “I would like our visitors to leave knowing that life at the turn of the 20th century wasn’t much different than life today.” 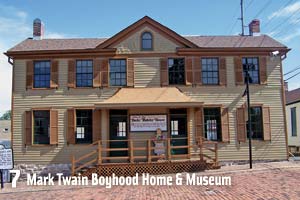 But did you know that the museum’s archive includes the Hannibal roster of the Cadets of Temperance? Fans of Tom Sawyer might recall that Tom joined the Cadets, mainly so he could wear a red sash and march in parades. 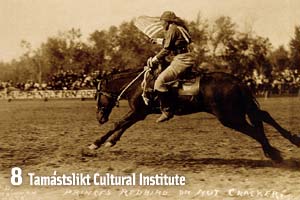 The cultural museum always has something unique going on. Last year, the photographic exhibit “Cowgirls: Contemporary Portraits of the American West” depicted that unglamorous look at ranch life in the modern West. But Tamástslikt didn’t just tell history with photos. It accented the exhibit with public programming on the interface of tribal and cowgirl cultures.

Here’s something you might not know about the museum. “There is a photo in the exhibit of a rock formation called Elephant Rock, because of its looks and because of a legend that refers to an elephant or mammoth being turned to stone there,” development officer John Chess says. “The story has been told for generations, long before the circus ever came to what is now called northeast Oregon. Clearly, the people had knowledge of these animals.” 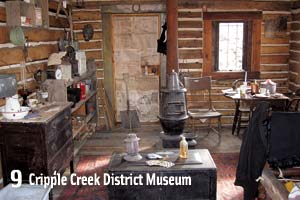 This museum never stops. Last year it acquired numerous antiques, newspapers, photographs, even an assay kiln, but topping that list had to be this: 77 ledgers containing property abstracts, records and mining deeds from the Ute Pass Historical Society. By the way, the museum also preserves the Midland Terminal Depot and the Colorado Trading & Transfer Co. buildings—the only two commercial structures to have survived Cripple Creek’s devastating fires of 1896.

The museum isn’t only about the past. In 2010 and 2011, the museum played host to “Doors of the Past,” a one-of-a-kind art exhibit in which local artists used antique doors or windows as their canvas. This year, the museum will switch to “Windows of the Past.” 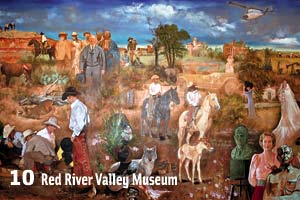 Prehistory … Roy Orbison … mounted animals (including a polar bear?!) … and Western art—not only a replica of Electra Waggoner Biggs’s studio, but also a juried art show. You wouldn’t expect to find so much inside a museum in a town of 11,000.

This museum has big ambitions. It’s looking to add the Great Western Trail Heritage Center, featuring an interactive scaled replica of nearby Doans Crossing. It aspires to show visitors that the Chisholm Trail wasn’t the only way to get cattle to market.

History Colorado Center (Denver, CO): Revitalized downtown Denver has a new attraction for history buffs. The museum opened this spring, and it promises great new interpretations of Colorado’s storied past.

Buffalo Soldiers National Museum (Houston, TX): With a new location, in Houston’s historic Third Ward, the museum honors not only the soldiers of the 9th and 10th Cavalry and the 24th and 25th Infantry of the Old West, but all men and women of color who served in every major American war.

New Mexico History Museum (Santa Fe, NM): With New Mexico celebrating 100 years of statehood, could there be a better place to have a party than at this new museum?

Cherokee National Prison Museum (Tahlequah, OK): Indian Territory’s only penitentiary from 1875 to 1901 opened in May. Stay out of trouble. 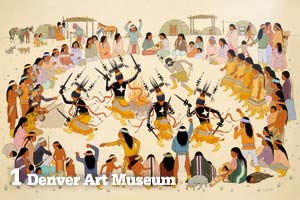 After an extensive remodeling, the American Indian art galleries—covering two levels in the North Building—reopened. It’s truly amazing, highlighting an 18,000-plus collection that spans more than 2,000 years, from ancient Puebloans to contemporary glass work. Nor was Western art ignored. To wit, “Western Horizons: Landscapes from the Contemporary Realism Collection.”

We should also pay tribute to the Petrie Institute of Western American Art. That organization teams up with the museum’s education department to develop interpretive programming for the works in the Western art galleries. 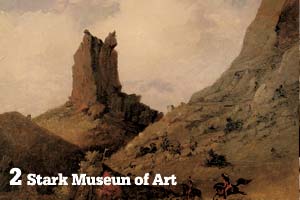 Talk about two dream exhibits. The Stark had it all last year, paying tribute to that great camel experiment—“Lands Fit for the Camel: Images from the Mexican Boundary Surveys”—and something it does better than most museums—“Visions of the West,” which highlighted its Western collection.

Of course, the Stark is best known for its Western Americana, but it also holds a significant collection of natural history rare books that introduce the theme of documenting nature. Its copies include Elizabeth Blackwell’s A Curious Herbal and the German edition, Herbarium Blackwellianum. 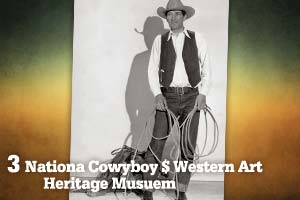 “Will James: The A.P. Hays Collection” opened in December (and you can still catch it through October 14), showing how the author and artist (Smoky the Cowhorse and Big-Enough) influenced the American perception of the West in a good way during the early 1900s.

While the museum might be best known for its Western art (from the galleries to the Prix de West art show and sale), it also covers history, entertainment and rodeo. Lesser known might be the Donald C. & Elizabeth M. Dickinson Research Center, which focuses on Western popular culture, ranching, Indians, rodeo and, naturally, Western art. 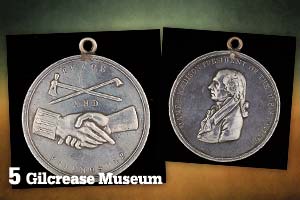 “Peace Medals: Symbols of Influence and Prestige in North America” showed the artistry of coins and medals given by American presidents to chiefs of important American Indian tribes in the 18th and 19th centuries. Of course, the Lakota, Comanche, Cherokee, et al, might not consider them so artistic, but there’s no denying that the Gilcrease is practically unmatched in its preservation and study of American art and history.

Of course, we’re still waiting to hear about how that two-headed calf wound up in the basement. 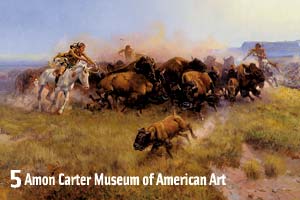 The museum celebrated its 50th anniversary, with exhibitions like “The Hudson River School: Nature and the American Vision” and “John Marin: Modernism at Midcentury,” but even the best temporary exhibits can’t pull in the crowds like the extensive collection of paintings and sculptures by Charles M. Russell and Frederic Remington.

On the other hand, the museum also owns the rare, complete 20-volume illustrated set of Edward Sheriff Curtis’s The North American Indian (1907–1930), which is among the most comprehensive records of American Indian life.

Booth Western Art Museum (Cartersville, GA): The Civil War gets featured, as does “The Indian Gallery of Henry Inman” and “The Western World of Harry Teague,” while the Southeastern Cowboy Festival & Symposium turns 10 years old.

Museum of Nebraska Art (Kearney, NE): Home of the state’s official art collection since 1979, this is an underappreciated gem that displays George Catlin and John James Audubon, to early Nesbraskans Robert Henri and J. Laurie Wallace, to modern-era artists like Grant Reynard and John Falter. Plus, admission is free.

Briscoe Western Art Museum (San Antonio, TX): The new Jack Guenther Pavilion, on the downtown Riverwalk, played host to the “Night of Artists” exhibition and sale this past spring, and the museum promises to “provide an entertaining, educational experience where visitors live the mystique of the American West.”

Heard Museum (Phoenix, AZ): Bolo ties get their due, and so does Geronimo (“Beyond Geronimo: The Apache Experience,” which runs through January 20, 2013). “The Art of Ceremony: American Indian Painting of the 20th Century” looks intriguing. You can spend hours in the museum’s 12 galleries.