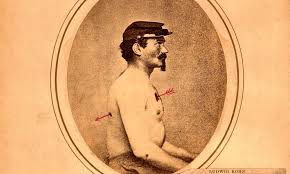 The most complete and detailed account of arrow wounds and treatments is Dr. Joseph H. Bill’s “Notes on Arrow Wounds,” which is considered the “definitive work on American arrow wounds.” Dr. Bill was a Civil War/Indian War era surgeon and recorded his observations.

In 1860 he was commissioned a second lieutenant in the army and stationed for a time in Fort Defiance, New Mexico where he wrote his essay, Notes on Arrow Wounds.

Bows and arrows were amazing weapons. A warrior could fire of six arrows in a minute making them super to the slow-firing rifles in the days before metallic cartridges. For the Indians, rifles and ammunition were not always available. They often did not have the tools or knowledge to repair a damaged rifle. Bows and arrows were a reusable resource. Bows were preferred over rifles during ambushes and night raids for reasons of quickness and stealth. They were also superior to pick off sentinels without creating an alarm. To the Indian they were an indispensable and important weapon on the frontier.

Dr. Bill wrote that arrows inflict wounds “with a fatality greater than that produced by any other weapons — particularly when surgical assistance cannot be obtained.” The arrow was a deadly weapon in its most basic form. Arrowheads could be made from stone, antlers, shells, hardwood, bone, or metal. The most common during the Indian War period were filed metal. The favored shaft was dogwood. The bark was removed and it was straightened by twisting. Most important were the feathers. The heavier the arrowhead the longer the feathers. They determined the speed and rotation of the arrow. The arrowhead was attached using tendons and sinew.

Some groups added to its effectiveness by adding other additions including barbs, that when removed, would further damage the wound or a deadly substance used in the Southwest the Apache added to the arrowhead, rattlesnake venom mixed with rotten meat. They would take an organ such as the liver of a dead animal such as a deer, then taunt the snake causing it to strike and inject venom into it. Then they would place the liver in the hot sun and let it putrefy before ceremoniously sticking their arrows into it. The victim not only got a nasty wound but something akin to a rattlesnake bite.

When the arrow penetrated the body the sinew became wet and loose. Dr. Bill cautioned the worst thing a friend could do was to pull the shaft out as the arrowhead would be left inside the body and it would be left to the physician to find it. It was much easier for the doctor and patient if the shaft was left intact until a doctor could remove the head and shaft as one piece.

Many of these variations proved difficult to manage and led to tools to extract the arrow from a wound. Dr. Bill used strong dental forceps used for pulling teeth.