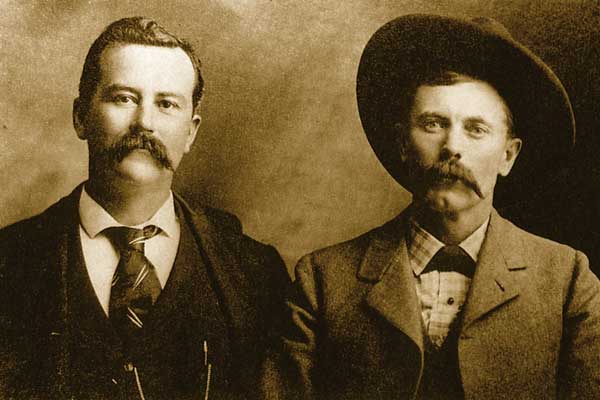 As they pick up the trail of five outlaws heading into the Chiricahua Mountains, they discover dropped .30-40 Winchester cartridges. The two realize they are not dealing with petty smugglers; they are trailing big game.

That afternoon, the two step into a camp where the outlaws recently left a pail of coffee still warm enough to drink. They follow the trail up Triangle Canyon until they reach another camp site, on a rockstrewn hillside, where the trail veers south from the creekbed they have been following.

Birchfield, who knows the area better than Scarborough, suggests they move across a ridge and descend into Dun Springs Canyon to approach the camp from a more advantageous side. Scarborough disagrees. “No,” he replies, “we’re going back down and see who these fellows are.”

The two riders start down the trail when they come across two saddled, but riderless horses about 75 yards in front of them. They pass the horses and dismount, sprinting forward on foot until they are about 200 yards from the camp.

Realizing they need to act quickly and decisively, Scarborough says, “There [is] no use to call on them to surrender,” so they get in position to command the battlefield.

Scarborough fires three or four times with his .30-40 Winchester 1895 and Birchfield, once, with his inferior .30-30 Winchester 1894. None of the bullets hit their targets and the five outlaws scramble for cover in the boulders.

For half an hour, nothing happens. Suddenly a head pops up from behind a boulder and Scarborough fires, then fires twice more to no effect. As minutes go by with no sign of activity, the two men speculate their prey has escaped.

The lawmen sprint back to their horses, sheathe their Winchesters, draw their revolvers, mount up and ride toward a nearby cluster of rocks. The outlaws open fire on them, and a .30-40 slug knocks Scarborough out of the saddle, an incredible shot at a moving target 350 yards away. One of the outlaws lets out a whoop. (Birchfield later identifies the shooter: “[I]t was old Capehart. I’d a-knowed him anywhere.”)

Birchfield’s horse is so unnerved by the shooting that he bucks, throws his rider and runs away. Luckily, Birchfield corrals Scarborough’s horse, grabs his partner’s .30-40 Winchester from the scabbard and jumps behind a sycamore. The outlaws rain fire into his position, and he is hit by ricochets, breaking the skin of his arms and head; one of the bullets bores through his shoulder.

Scarborough’s wound is serious; the bullet broke his leg near the thigh. He is passed out, and Birchfield thinks him dead. Then Scarborough calls out to him. Birchfield crawls over to the fallen lawman’s exposed position, throwing up rocks as a barricade to shield the pair from further gunfire.

The gang members hold their distance (some historians speculate two of the outlaws, Thomas Capehart and Will Carver, know Birchfield and like him.). Finally, Scarborough yells out, “We have one gun between us; I’m wounded, but if you will show yourselves, I’ll fight the whole bunch.”

The outlaws don’t take him up on the offer, but they do continue to fire on them. Their bullets send rock splinters into the lawmen’s position, but do no further damage.

At dark, Birchfield mounts Scarborough’s horse and spurs away. Riding through snow and sleet, he arrives at the San Simon train station at three a.m. He telegraphs for a doctor, then gathers help, leading a rescue team to Scarborough, who is now suffering from a loss of blood and exposure. The rescuers deliver Scarborough to the San Simon train station at two p.m. the next day and place him on a train to Deming, New Mexico.

Nearly a year earlier, in July 1899, Will Carver almost single-handedly defeated an eight-man Cimarron posse at the Battle of Turkey Creek Canyon, in northern New Mexico. Armed with a rifle and smokeless powder bullets, the outlaw rained fire on the lawmen’s positions with impunity; one of the posse later dies because of a bullet Carver shot into his thigh.

Author Jeffrey Burton tells True West that the outlaws in the Triangle Canyon Shoot-Out were armed with similar superior firepower. Their modern rifles were chambered with .30-40 bullets that had a range of 250 yards. Even so, Burton admits the 350-yard shot that downed George Scarborough was a “lucky hit on a moving target.” Nonetheless, the Wild Bunch members proved themselves quite adept at utilizing the latest technology to their advantage.

George Scarborough made it alive back to his home in Deming, New Mexico, but the loss of blood and the long hours of exposure to the cold had weakened him. He died on April 5, after suffering through an operation to remove bone fragments from his shattered thighbone. He left a widow and seven children.

The death of Scarborough came four years to the day after his shooting of John Selman in El Paso, Texas. Selman is the gunfighter who shot John Wesley Hardin in the Acme Saloon.

Three different posses converged in Arizona at San Simon, including one led by Texas John Slaughter. The combined posses trailed the five outlaws into Mexico, but then lost trace of the gang.

As time went on, folks started saying Walter Birchfield had led Scarborough into a trap to be assassinated, a story advanced by cattlemen who knew Birchfield. Birchfield’s actions, however, belie that motive. If true, why would he have created a breastwork to defend the wounded lawman, then ride through snow and sleet with flesh wounds and head a rescue party in the cold night to bring Scarborough back? Hardly the work of someone who wanted to betray the lawman.

After the shoot-out, the members of the Wild Bunch scattered. Carver returned to Texas, where, a year later, he was gunned down in Sonora, while casing the town for a bank robbery.

Recommended: The Deadliest Outlaws: The Ketchum Gang and The Wild Bunch by Jeffrey Burton,  published by University of North Texas Press.