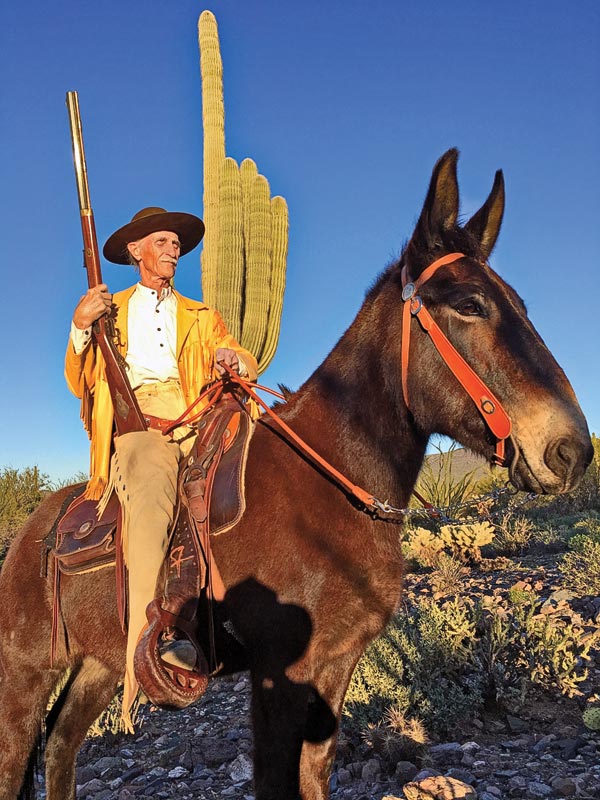 A retired aerospace engineer living in Waddell, Arizona, Lee Anderson has spent more than 60 years studying equine training methods and traditions of the Spanish Colonial vaqueros of 1750-1800, the Mexican cowboys of 1850-1900 and the American cowboys of 1880-1920. He shares his research in his book, Developing the Art of Equine Communication, published by Moonlight Mesa Associates. Anderson also teaches living history in period performances with his horse, Concho, or his mule, Zelda (shown with him above).

My wife rides a mule, and I occasionally give her a bit of a good-natured hard time about it. I tell her, “Your mule has a horse for a mother and a donkey, or an ass, for a father. That makes it a half-ass horse.” I wonder if mules might be responsible for the term “half-ass” when describing something that is kind of unconventional.

Confederate rebels captured 40 mules and an Army general. When President Abraham Lincoln heard the news, he reportedly said, “I sure am sorry to lose those mules.”

You should saddle mules with a britchin.’ This strap, which goes around the rump and above the hocks, keeps the saddle from sliding up the neck on account of their low withers.

A few naturally bred wild mules can still be found on some Western land overseen by the Bureau of Land Management today.

The high price of mules in Arabia was due to their being ridden by the rich, novelist George Orwell stated in his diaries. They were considered a badge of wealth.

The average mule is able to handle a daily work load more than double that of the average horse.

The Bible makes no comment on the stubbornness of mules, but does mention it of people.

Mules were introduced into the chariot races in the Olympiad 70, or 500 years before the time of Jesus Christ.

When two people pick up a mule’s front foot and opposite hind foot, the mule can still stand on its other two legs; horses just plain can’t (or won’t) stand on two legs.

Thousands of mules served the Allied Armies in WWI and WWII.

Mules are sterile because reproduction requires an even number. Mules have 63 chromosomes compared to 62 for donkeys and 64 for horses.

Dan Thrapp’s saddles (on p. 7) intrigue me. The stirrups and stirrup leathers look to be made by South American saddlemakers who used double-rigged Texas-style trees.

Napoléon rode a mule when the French military leader and his Army crossed the Alps, starting the journey on May 15, 1800, to surprise the Austrian Army in Italy.

Alexander the Great rode a mule into battle, and 12 mules pulled his war chariot. After the Ancient Greek king’s death in 323 BCE, 64 mules decked out in gold harnesses pulled his funeral bier.

Mules mature both physically and mentally later than horses. Horses mature between the age of four and five, while mules do around six.

Considered dangerous and unreliable because they were extremely hard to control, male mules, or jacks, were nearly always gelded. They usually behaved worse than stallions.

I once heard that if you chew gum while riding a mule, you will be exercising every muscle in your body.

Lee Anderson knows about real cowboys. This retired aerospace engineer living in Glendale, Arizona, has spent more than 60 years studying the Spanish Colonial vaqueros of 1750-1800, the Mexican cowboys of 1850-1900 and the American cowboys of 1880-1920. The horse training tools, methods and traditions he gleaned from the vaqueros have informed his own teachings, which he shares in his book, Developing the Art of Equine Communication, published by Moonlight Mesa Associates. Anderson offers up his living history tutelage in period performances with his horse and faithful partner, Concho, as an “Amazing Arizonan” for the Arizona Historical Society.