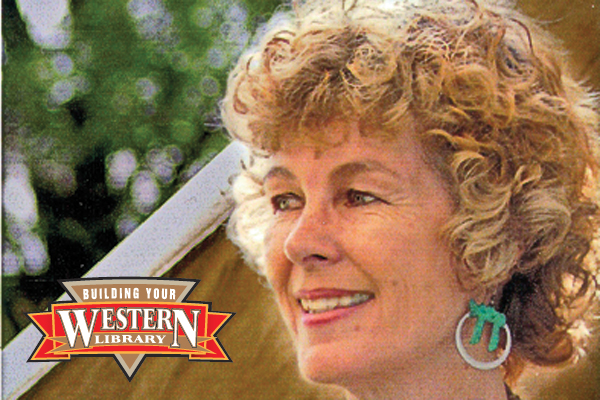 Teaching is her vocation. Preservation is her passion. History is her muse. Lynda A. Sánchez, who moved to Lincoln, New Mexico, over 40 years ago, has pursued her vocation, passion and muse to their fullest extent.

She taught high school and college, led a nationally recognized preservation battle to preserve Fort Stanton (see her book Fort Stanton: An Illustrated History) as a state historic site, and became a preeminent historian of the Mescalero Apache people. Her life’s work has had a positive effect on many and she has served a role model to many more, in many ways. But just as she has given, she has received. Sánchez became a student and colleague of Western historian Eve Ball, who mentored her in the art of oral history, research and writing. Before Ball died, Sánchez and her colleague Nora Henn assisted Ball in her final work, Indeh: An Apache Odyssey.

Sánchez, who lives on a ranch along the Rio Bonito, has recently published one of her own most important books, Apache Legends and Lore of Southern New Mexico: From the Sacred Mountain (The History Press), which began with an oral history manuscript of Mescalero Percy Bigmouth she received in the early 1980s. She promises her next book, a novel, won’t take as long to complete, but in the meantime, she recommends these five classic Western titles for your personal library.

1. Unknown Mexico (Carl Lumholz, Charles Scribner’s Sons): His two-volume 1902 publication is a must-read for anyone writing about the Southwest and northern Mexico. Beautifully illustrated with photos and sketches, it truly takes one back in time. He writes terrific descriptions of Apache camps and other Native folks, including the Hispanic residents of the Sierra Madre. If you can’t travel, this is a book that will take you there.

2. Shane (Jack Schaefer, Houghton Mifflin): When we lived in Santa Fe, my parents invited Jack Schaefer to a gathering at our house. I was totally in awe of the man who had written this story of a naïve boy and a gunfighter that was unlike most Westerns of the era.

3. The Wonderful Country (Tom Lea, Little Brown & Co.): Who can forget the magnificent horse named Lágrimas, and the relationship between horse and rider? It is a tale of the borderlands including the bold artistry of Lea and reveals the author’s respect and love for the wild country.

4. The Mysterious Rider (Zane Grey, Grosset & Dunlap): One of the lesser-known of Grey’s books includes the romance of cowboys, ranching and a mystery rider you will never forget.

5. Hard Country: A Novel of the Old West (Michael McGarrity, Dutton): First of a trilogy includes great historical research combined with the fictional lives of Apaches, Hispanics and Anglos in southern New Mexico.