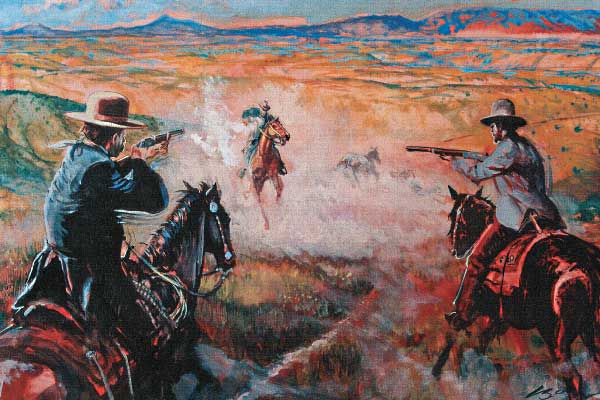 Late afternoon light tips the tops of the foothills leading down into New Mexico Territory’s Ruidoso Valley. The Tunstall party crests a divide and starts down a narrow gorge leading down to the Ruidoso River—unaware that they are being pursued.

The men have been in the saddle for nine hours and are 10 miles from Dick Brewer’s farm. Billy the Kid and John Middleton ride drag. Ahead of them are the horses and the main group—John Henry Tunstall, Rob Widenmann and Brewer.

When the Kid turns in the saddle,  he sees a group of horsemen galloping up the trail behind them. He and Middleton spur their horses, scattering the remuda, as the pair ride rapidly to warn their comrades.

The attackers open fire. Bullets zing between Widenmann and Brewer, sending Brewer’s horse bucking. Caught in the open on a treeless slope, Brewer, Widenmann and the Kid head for a hilltop strewn with boulders.

Middleton, aboard his bay, reaches Tunstall just as the firing starts. I “sung out to Tunstall to follow me,” Middleton later says. “He was on a good horse; he appeared to be very much excited and confused. I kept singing out to him, ‘For God’s sake, follow me.’ His last words were, ‘What, John? What, John?’”

When the horseback shooters spot Tunstall, they give up their attack on the rest of the party and turn toward the Englishman.

Middleton, who has peeled off from Tunstall, quickly makes his way up the ravine to a defensive position taken by the Kid, Brewer and Widenmann. As he dismounts, they all hear a burst of gunfire echo through the canyon. Middleton says out loud what all four are thinking, “They’ve killed Tunstall.”

Ragged elements of the posse turn back up the ravine, circle Tunstall’s men at a safe distance and then disengage. Tunstall’s men never fire a shot. After dark, they slip into  Lincoln.

That evening, John Riley shows up at Alexander McSween’s house in a “drunken condition.”

Riley, anxious to show he has no weapons, turns out his pockets for McSween and out falls a memorandum book. After asking each man in the house  if any want to kill him, Riley leaves, McSween later testifies.

McSween examines the book and finds a letter from District Attorney William Rynerson, plus various incriminating evidence regarding cattle sales involving the House, the local name for Lawrence Murphy’s general store. The book also contains code names for various Lincoln players: Thomas B. Catron is “Grapes;” Indians are “Trees;” Rynerson is “Oyster;” Dowlin is “Pimp;” and McSween is “Diablo” or devil. (Several scholars today dispute the authenticity of McSween’s find.)

Around midnight, a mass meeting is held at the McSween house.

The next day, at two a.m. Buck Morton and his posse return to Tunstall’s ranch along Los Feliz River with the Englishman’s horses and report to Jimmy Dolan and Bill Mathews. One of the nine horses had died on the return trip.

Jesse Evans asks for two of the horses, which he claims the men had gotten from the Kid, but Mathews refuses to turn them over.

During his visit, Morton tells Mathews his version of the events: Tunstall had “resisted and fired at him and that he returned the fire and Tunstall was killed.”

When Taylor F. Ealy arrives in Lincoln with his wife and children, and schoolteacher Susan Gates, he records in his diary: “Reached Lincoln at 11:00 a.m., 9 miles from Ft. Stanton. Found Tunstall had just been murdered. McSween and Shield’s house full of armed men. Guard on housetop.”

The Kid and Brewer swear affidavits before Justice of the Peace John Wilson, naming Dolan, Evans and 16 others responsible for Tunstall’s murder. A coroner’s inquest is held at the McSween house.

When the Kid and Fred Waite try to help serve warrants for Tunstall’s murder, they are thrown in jail.

The quintessential “dude” on the frontier was 24-year-old Englishman John Henry Tunstall. In spite of his lack of experience out West, the historical record shows he covered some major territory in a short time (see above map). Trying to get a handle on the distance he traveled in February 1878, I polled my cowboy cousins in Kingman, Arizona, about the longest distance they have ridden on horseback in one day. “About 55 miles,” Craig Hamilton told me. When I asked him what that felt like, he bluntly replied, “Well, my ass felt like hamburger.” Tunstall rode more than 60 miles on the first leg of his journey, then another 30 to 40 miles on the second. While riding in the dark, after a couple hours of sleep, he and his cowboys traveled another 30-some miles before Tunstall was shot out of the saddle. Even conservative estimates of the distance put the mileage at more than 120 miles, which is flat-out amazing. And he was a dude!

All of Tunstall’s hired guns, including the Kid, leave him to face his fate alone. The closest we will probably get to knowing how Tunstall was killed is this secondhand account by posse member George Kitts: “That Tunstall was some distance off and was coming towards them…. That [Tom] Hill called to him to come up and that he would not be hurt, at the same time both Hill and Morton threw up their guns resting the stocks on their knees…. That Morton wished to shoot him and Hill said hold on till he comes nearer. That after Tunstall came a little nearer Morton shot him in the breast and then Hill shot him in the head….That two barrels of Tunstall’s revolver were emptied after he was killed. That Tunstall fired no shots and that Tunstall was killed in cold blood.”

On February 20, 1878, assistant post surgeon Lt. Daniel M. Appel of Fort Stanton conducted the postmortem and embalmed the body of John Henry Tunstall. “In my opinion the skull both on account of its being very thin and from evidence of venereal disease, was very likely to be extensively fractured from such wound,” Appel reported.

Alexander McSween had Lincoln County Sheriff William Brady arrested for unlawful appropriation of feed from Tunstall’s store on February 21. Brady was bound over to the April court term.

Tunstall’s funeral was held at three p.m. on February 22. The Reverend Taylor Ealy conducted the service, translated into Spanish by John B. Wilson. The subject of Ealy’s first sermon was, “If a man die shall he live again.”

Leaning on his deputy U.S. marshal status, Rob Widenmann and a detachment of soldiers searched Jimmy Dolan’s store on February 23. They were looking for Jesse Evans, Frank Baker and others. Finding no one, Widenmann and the soldiers repossessed Tunstall’s store, threw Brady’s guards in jail and released Billy the Kid and Dick Brewer. In spite of the tense activity, Ealy wrote in his diary: “Lincoln. All seems quiet. Three soldiers in the house at all times.”

Recommended: The Illustrated Life and Times of Billy the Kid by Bob Boze Bell, published by Tri Star-Boze