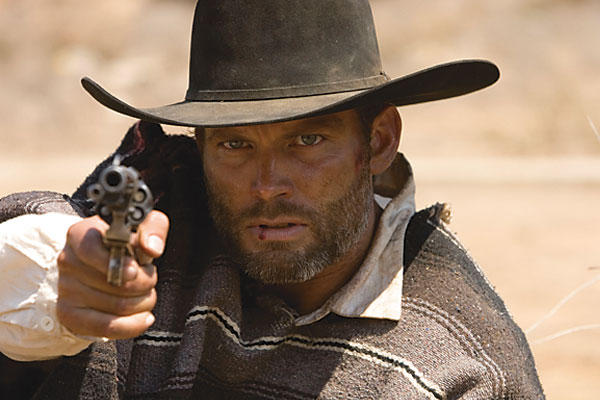 For some time now, Westerns fans have been promised a vast number of new films being produced directly for television, by AMC, Hallmark and RHI Entertainment, in collaboration with the ION (formerly PAX) cable channel. We’ll be seeing three of these new movies in March and April 2008.

(March 15, 2008) At the top of the cast is Casper Van Dien (shown here), Bruce Boxleitner and Ernest Borgnine. The story centers around a war between landowner Borgnine and the railroads, and was originally designed for Clint Eastwood by Dennis Shryack, who co-wrote Pale Rider (1985).

(April 12, 2008) Stars Lou Diamond Phillips, Timothy Bottoms, Vincent Spano and Stacy Keach. It’s about a vet (Phillips) who returns home and gets into a scrap with a boyhood pal (Spano), who wants to own the world.