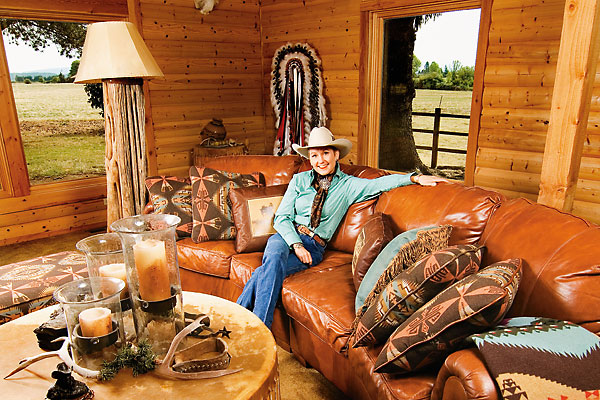 Both trace their Oregon heritage back at least 100 years. Both are known world-wide. Both have strong bonds with American Indians. And both strive for ultimate quality in their work while maintaining the honesty and tradition of their roots. It is no surprise, then, that these two Oregon naturals should join forces, often working together to accomplish their individual aspirations. Both continue to garner the spotlight in their respective fields.

From his humble beginnings when he founded the Harms farm outside Canby in the 1870s, Joni’s great-great grandfather couldn’t have known one of his descendants would become an award-winning entertainer; one who writes most of her own songs. Many of the lyrics are based on her life on the Harms Century Farm and the core values she acquired growing up and now bringing up her family there. She and her husband Jeff have two children, 13-year-old Olivia and 10-year-old Luke, who are fifth generation on the farm. Reflecting on the choice to live in Oregon, Joni says, “I can’t give up what I’ve got here. It’s a great place to raise a family, and I can get anyplace I need to be within 24 hours.”

Several years ago, Joni renovated and enlarged the old homestead. The improvements were pretty much her own design, with the help of Tom Stevens, S&L Remodeling, in Aurora. Built on the site of the original, the 6,000-square-foot pine log replacement holds many tributes to the earlier home. The renovation was done in two stages: the kitchen area was completed about 13 years ago, while the living room area was finished four years ago. The main living room is built directly on the site of the old homestead, with picture windows that frame Mount Hood (on a clear day) to the east, and some of the Harms family cattle herd and Christmas trees they grow in constant view on the other sides. It is a peaceful, bucolic setting. A small log cabin guest house also sits on the property and continues the warm, Western ambiance one experiences in the main house.

The 20-foot beamed ceiling in the living room gives an openness to the area. Cherokee Ironworks in Mineral Wells, Texas, created the two custom chandeliers with Western-themed cut outs, a tepee shade and bronze feathers linking it to the ceiling. This reflects Joni’s theme of the West and its Indians, seen throughout the house. In one corner of the living room, an Indian headdress is displayed.

Joni’s property was once the land of the Molalla Indians. She’s in the process of developing her “museum” room in the house, which will pay tribute to the historic tribe. This room will also include a family clock, a wedding present to her great-great grandparents, a spinning wheel and an antique sewing machine. On one wall, she plans to hang the original deed to the property, signed by President Chester A. Arthur on April 10, 1872.

Joni’s office is also centered by another chandelier by Cherokee Ironworks, featuring cut-outs of her brand, a horseshoe encircling the number 13. It is called the Lucky 13, since her dad was released from the military on November 13, he arrived home at Dock 13; Her daughter was born on June 13, in room 13, at 1313. As Joni says, “That’s my lucky number.”

The Harms/Pendleton Woolen Mills relationship has developed over the years. It is one of mutual admiration. Joni often wears Pendleton clothing as she travels around the country. As she says, “I believe in the product. Both of us being from Oregon, it is neat for me to have something to wear that represents my home state.” Selecting furniture from Pendleton Woolen Mills Home Furnishing Division for her new home was a natural next step. The relationship works well for Pendleton too. The family-owned company, which is celebrating its 100-year anniversary in 2009, held its centennial kick-off event in Pendleton last Fall with Joni as the featured entertainer. C.M. Bishop III, president of Pendleton, was thrilled with her performance. “With her two adorable children who joined her, Joni fits right in with our family,” Bishop says.

Even before her new home, Joni accented various rooms with Pendleton blankets and fabrics. Pendleton’s Blanket Division has been the company’s mainstay since its inception. “We are proud, and the Indians are proud,” says Bishop. “Pendleton is a part of their culture and ceremonies. They were confronted early on with a lot of cheap products that wouldn’t last and then Pendleton blankets came along. They were something the Indians immediately identified with. Our early design people worked with the Indians and many of these designs are still available.” High quality is standard, and the designs are authentic as seen in the Buffalo Lodge Robe on the antique bed in the guest house. This robe is the original ceremonial size for Indian blankets.

The queen natural colored blanket in the guest bedroom is a San Miguel pattern with standard shams of mocha color.  This pattern was inspired by mid-to-late-19th-century Indian weaving traditions and the influence of Spanish missionaries in the Southwest. The saddle blanket on the wall is woven from Churro wool.

The master bedroom features Harding sage bedding and a Yavapai Apache toss pillow. This pattern has been around since at least 1923, when the company recognized President Warren G. Harding’s visit to Oregon.

In keeping with the Pendleton theme,  the dining room table, created by DJ Classic’s in Prineville, is often set with red dinnerware from the Home Collection, shown here with antique silverware and mats of Joni’s. On special occasions, her table sparkles with her great-grandmother’s china. The everyday Down Home Country feel in this room is harnessed by the antler chandelier, the one-of-a-kind pine table, with Joni’s brand stamped onto its legs, and the Pendleton Woolen Mills fabric on the chair seats.

Pendleton goods dominate the living room: the leather couch, the pillows and matching ottoman are a mix of leather and wool of the Cross Canyon design. The blanket thrown over the couch is from Pendleton’s Vintage collection, which, although new, gives tribute to Pendleton’s rich heritage. The Harms habitat is so warm and comfortable a visitor can easily see why Joni doesn’t ever plan to move to Nashville. She’s determined to stay just as natural as her surroundings. She once commented, “I’m probably the only woman walking the streets of Nashville today with a cowboy hat on, but that’s who I am.” She is a true woman of the West, at peace with herself and her environment.

On the horizon for this star is a 2009 TV series Let’s Put the Western Back in Country, which she will host on Comcast and RFD networks. The show is titled after the award-winning song she wrote. She averages about 150 days a year on the road, at times jetting to Nashville to complete her 11th cd. She is now in the process of selecting the songs she will include, all of which she has written. Following in her mom’s career footsteps, her daughter Olivia is scheduled to do a duet with her on this cd.

Pendleton Woolen Mills has plans in the works too. In its 100th year, its Oregon sesquicentennial blanket and a Muchacho (child’s blanket) are commemorative, fund-raising items for the state of Oregon’s 150th celebration. “We have raised significant funds for the Smithsonian Museum of the American Indian and countless other organizations through the sale of custom blankets,” says Chairman of the Board John Bishop. “We look forward to a year of celebration wrapped in this blanket.”

At the Harms home, comfort comes  already wrapped in a Pendleton. Nary a room is without a heritage blanket.