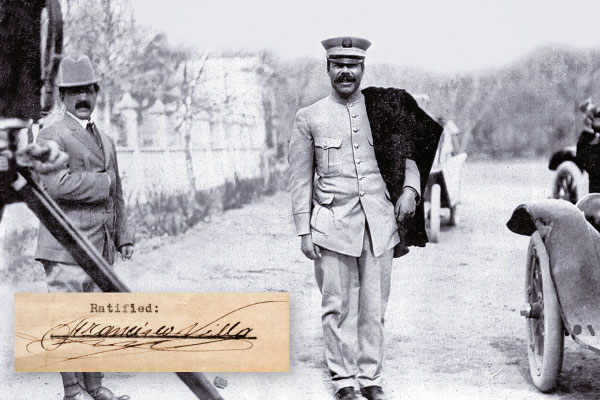 They would make a movie!

The popular tale states Mutual agreed to pay $25,000 in gold to Villa, money he could use to buy weapons and supplies. Villa agreed to fight only during daylight, to aid the cameramen, and to let the film crew direct his troops to get the best shots.

Now that would be a Hollywood war.

But the actual movie contract, Villa biographer Friedrich Katz revealed, was simpler. Villa gave Mutual the exclusive right to shots of the revolutionaries in battle; Mutual guaranteed Villa 20 percent of the gate when the film was shown.

The studio also threw $10 into the pot, which Director Raoul Walsh sweetened by delivering $500 to Villa, along with uniforms that looked better on camera than the dusty, dirty rags the general and his lieutenants had been wearing.

Unofficially, Villa gave the crew opportunities for retakes when the live action was not up to snuff or when setting up the clumsy cameras had led to missed shots. He even staged some events for the cameras, an important allowance once the crew realized getting real shots of battle was virtual suicide for the cameramen.

The movie ended up a docudrama, with newsreel footage spliced in and actors added to flesh out a mythical story of an oppressed Villa forced to take up arms against a cruel government.

The Life of General Villa premiered in New York City on May 9, 1914. Anecdotally the film performed well at U.S. and Canada box offices (the gross take was not well documented at that time). Yet just how much money Villa earned from the venture is unclear.

The film served as the pinnacle of Villa’s popularity. By the end of the year, the general’s bad deeds caused the U.S. government to cut off aid to him. American public opinion of Villa tanked when his troops attacked Columbus, New Mexico, and killed 18 Americans in 1916.

But for Hollywood, that attack provided a golden opportunity. It took the Villa film, shot other dramatic scenes, recut it and portrayed Villa as the worst man in the world. HBO dramatized the affair to the “nth” degree in 2003’s And Starring Pancho Villa as Himself.

Ten years later, a collector paid Heritage Auctions $5,000 for the signed five-page movie contract between Mutual Film Corporation and Pancho Villa (see the general’s signature from the contract in inset). As for the 1914 movie itself, only a few stills and publicity shots survive.

The Hollywood legend of Villa and Mutual’s agreement may still persist, but now you know the real story.