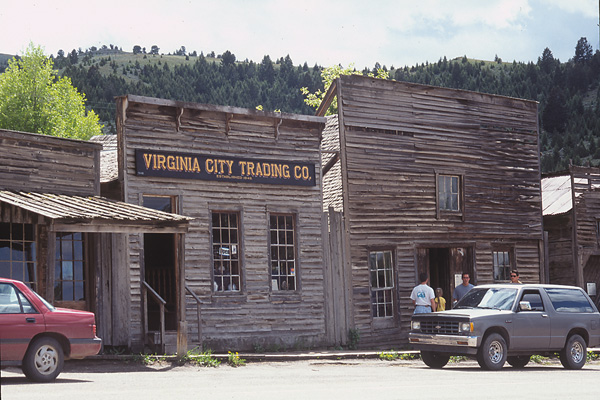 You might not be asked to sign a paper pledging allegiance to the Union when you enter Virginia City, Montana, but then again you could be. Born during the throes of the Civil War, Virginia City originally had the name Varina, for the wife of Con-federate President Jefferson Davis, and there was real contention in 1864 as Confederates tried to control the gold coming out of Alder Gulch and get it to the South. The Northern supporters rallied, however, and preserved the gold for the Union.

In 1863 when miners found gold in Alder Gulch, the region was a part of the Idaho Territory, but Virginia City became the territorial capital of Montana Territory shortly after it was established on May 26, 1864. (The town replaced Bannack, Montana’s first territorial capital and served until being replaced by Helena, the third territorial and eventual state capital.) Virginia City’s business district grew quickly with the establishment of stores and saloons to serve the 10,000 miners who flocked to the gulch in search of gold.

When the gold played out, the miners left, but some residents remained. Though Virginia City (located 90 miles west of Yellowstone National Park) became a ghost of itself, it didn’t become a ghost town. By 1945 Virginia City attracted the attention of Charlie and Sue Bovey, who bought most of the town’s buildings, many of them still filled with original merchandise and furnishings that had become antiques.

The Boveys also purchased historic structures from throughout Montana and moved them to Nevada City (less than two miles up the road from Virginia City) where they established a frontier town. By the 1990s, the Boveys had died and it became clear that Virginia City’s and Nevada City’s antiques could be sold to the highest bidder. That is when the state stepped in and bought both Virginia City and Nevada City for the hefty price tag of $6.5 million.

Though much of the town is now a state-owned historic district, Virginia City is still vibrant (particularly in the summer). You can spend a day strolling along the boardwalks and leaning against lampposts that have stood  for more than a century. Transportation in today’s Virginia City covers every spectrum of the town’s life. Take a ride with Scott and Dawn Hagedorn on their stagecoach, climb on the train for a journey between Virginia City and Nevada City, and ride a 1941 fire truck as it takes you around town on a 35-minute historical tour. Each type of transportation will give you a different perspective of the city.

In the summertime, special events take place nearly every week. One of the biggest is the Grand Ball of 1864, which opens with a sunset promenade August 17 along the town’s main boulevard (Warren Ave.), and is followed by the Grand March and Ball. Throughout the weekend (Aug. 16-18), the Heritage Days craft fair with demonstrations will be underway in town.

On any given evening during the summer, you can attend a theatrical presentation, such as The Brewery Follies, a vaudeville show in a cabaret atmosphere, or attend a melodrama at the Opera House, presented by the Virginia City Players.

As the Montana Historical Foundation put it, “Virginia and Nevada cities are frozen in time. The climate was too cold for rot and bugs to destroy the buildings and artifacts. Low snowfall in the area kept the roofs from collapsing. There was no major fire. This is the only combination of original buildings on their original sites and authentic artifacts of an 1860s mining boomtown left in the West.”

Candy Moulton is the author of Everyday Life in the Wild West and nine other nonfiction books and co-editor of Hot Biscuits, an anthology of short fiction by cowboys and ranchwomen.