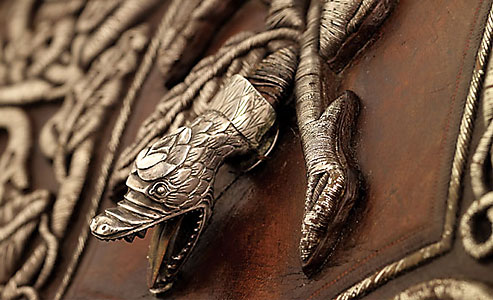 When Mexican Revolution Gen. Francisco “Pancho” Villa sat on his ornate silver saddle, he probably did not envision that the six-year-old son of a Hollywood director would play “cowboy” on it in his family room in Benedict Canyon, California.

In 1933, ten years after Pancho Villa’s assassination, Howard Hawks was filming the movie Viva Villa!, 200 miles outside of Mexico City, when he received Villa’s last saddle as a gift from the general’s widow, María Luz Corral de Villa. On January 28, that saddle sold for a world record bid, $625,000—more than four times its reserve price—at the High Noon Western Americana Auction in Mesa, Arizona.

The boy who played cowboy on the saddle, David Hawks, wrote in a letter how the saddle had “disappeared” after the Hawks’s home sold while his father was overseas filming Land of the Pharaohs in 1954. When his father later saw the saddle advertised for sale, he filed a theft report in 1976 with the Palm Springs Police Department. Although Howard would not live to see the saddle returned to him, it was back in the possession of the Hawks family after a court settlement in 1982.

Given the saddle’s intricate red oak leather tooling and silver embroidered snakes and florals, Villa likely used it as a parade saddle. Joaquin Rodriguez and Alberto Tulan Cingo Marquez made it for him in the 1920s. They marked the stirrups and the saddle horn with his initials, “FV.” “Rodriguez probably fabricated the cantle and the other wooden portions of the saddle” and Marquez “probably executed the leatherwork,” wrote Museum of New Mexico curator Charles Bennett to Howard’s son-in-law, Donald D. McCampbell, in 1983.

Seven years later, Chuck Ramsey bought the saddle from Trails West Gallery in Laguna Beach, California. He shared it with the public immediately, loaning it to the Witte Museum in San Antonio, Texas, and the South Texas Museum in Edinburg. It last went on exhibit at the Witte, in 2010, to commemorate the 100th anniversary of the start of the Mexican Revolution.

After the auction, Ramsey, who lives in San Antonio, told True West, “I was surprised that there were not any wealthy Mexican Nationals bidding. I ran a number of ads in Mexico that read, ‘I want to come home.’ But it didn’t. It will be in Texas for a while longer.”