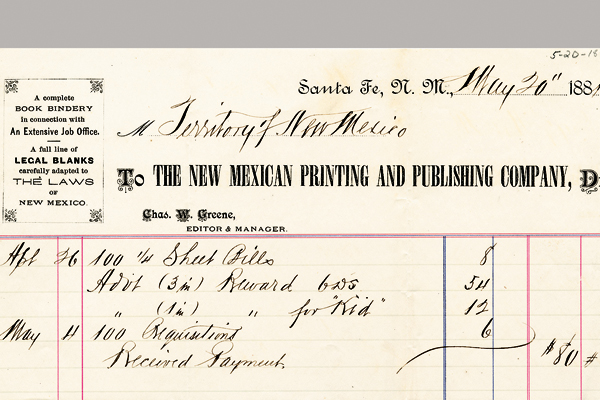 For most of the last century, historians believed Billy the Kid never appeared on a wanted poster.

True, Gov. Lew Wallace posted a wanted notice for “William Bonn[e]y alias The Kid” in a Santa Fe newspaper, but that is not the traditional poster of our Old West outlaws.

This conventional wisdom about the Kid was turned on its head recently when the Lew Wallace Collection at the Indiana Historical Society released transcripts of several Billy the Kid letters in its collection and a copy of a printing bill from the New Mexican Printing and Publishing Company in Santa Fe, New Mexico (above). The bill is dated May 20, 1881 (two weeks after the Kid’s escape from the Lincoln County Jail in Lincoln, New Mexico), and calls for 100 “Kid” reward posters.

Several veteran collectors of Old West memorabilia have estimated that if found, one of these original wanted posters would be worth in excess of $5,000.

The printing bill presents several intriguing mysteries. While the bill is dated May 20, the ledger entry appears to be April 26, which is two days before the Kid escaped on April 28. This opens the door to some speculation as to whether it may be another “Kid” (since, on April 26, the Kid was in jail awaiting his hanging and there would be no need for a wanted poster). Also mystifying is the word above “Kid,” which may be an abbreviation for broadsheet (a newspaper with full-size pages, as opposed to tabloid), although that is mere speculation.

If you find such a reward poster, let us know.

UPDATE: Researcher and author John Boessenecker points out that the “3 in.” and “2 in.” notations on the May 20, 1881, bill refer to how many column inches the “Kid” advertisement appeared in. The bill is for a newspaper ad, not a wanted poster.