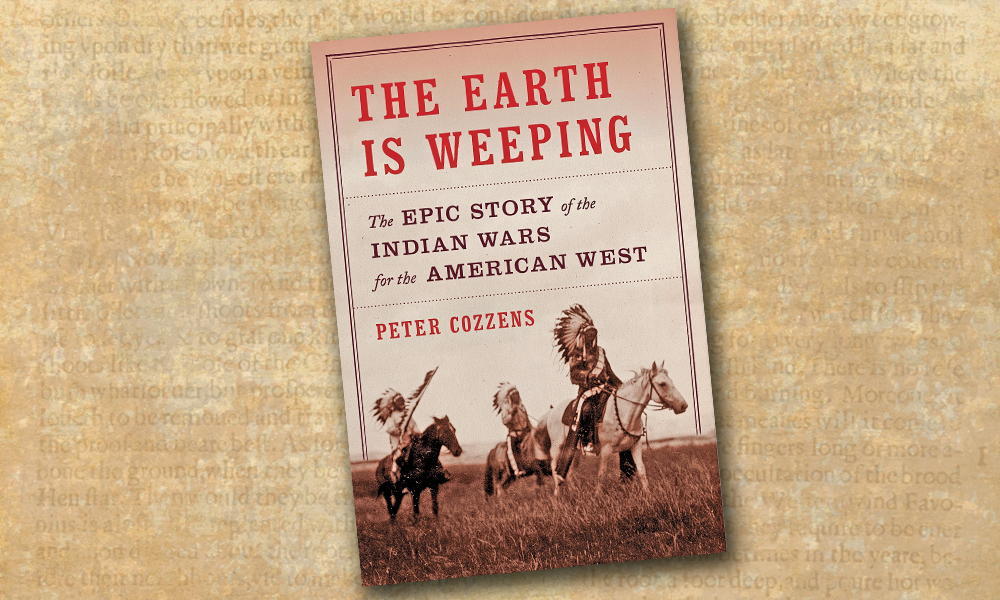 Peter Cozzens’s The Earth is Weeping: The Epic Story of the Indian Wars for the American West (Alfred A. Knopf, $35) is the most comprehensive, insightful synthesis of the conflict between the Western tribes and the United States government and citizens published by a popular New York press in decades. Like William Manchester’s The Glory and the Dream: A Narrative History of America, 1932-1972, the Maryland author’s brilliant thesis and detailed narrative will sustain the reader through three decades of the cataclysm and nearly 500 pages from the prologue to the conclusion. The historian’s insightful endnotes and inclusive bibliography prove helpful to the student or reader eager to pursue further reading in a narrower field of U.S.-Indian tribal history between 1862 and 1891. One of the primary strengths of Cozzens’s research is his thesis that succinctly seeks a sharper understanding of the cause and effects of the American government’s policies, citizen relations with the tribes, intertribal history and warfare, and the United States’ massive immigration into the West during and after the Civil War.

Cozzens writes: “A myth as enduring as that of an army inherently antagonistic toward the Indians is that of united Indian resistance to white encroachment. No tribe famous for fighting the government was ever united for war or peace. Intense factionalism ruled—each tribe having its war and peace factions that struggled for dominance and clashed, sometimes violently with each other.”

The strength of Cozzens’s scholarship in The Earth is Weeping is twofold: his balanced used of Native and non-Native sources and his ability to tell such a broad, panoramic story, with so many regional players and actions, as a compelling tale that expertly compares and contrasts a diverse set of U.S.-Indian conflicts, beginning with Red Cloud’s War and concluding with the Battle of Wounded Knee. In a publishing year in which such magnanimous works as Paul Andrew Hutton’s Apache Wars: The Hunt for Geronimo, the Apache Kid, and the Captive Boy Who Started the Longest War in American History (see True West review, June 2016), Benjamin Madley’s An American Genocide: The United States and the California Indian Catastrophe, Paul C. Hedren’s Powder River: Disastrous Opening of the Great Sioux War, and Jerry Keenen’s The Terrible Indian Wars of the West: A History from the Whitman Massacre to Wounded Knee, 1846-1890 were published, Cozzens provides the greatest overall context and focus to the inter-connectedness and influence of the apocalyptic forces that shaped the American West from 1862 to 1891.

Cozzens’s interpretation expertly blends Old and New Western history theses of process, making it an extremely viable candidate for the Pulitzer and National Book award. As Cozzens so succinctly states in his introduction: “Intertribal conflict was in part the consequence of a fact that has never been appreciated. …that the wars between Indians and the government for the northern plains, the seat of the bloodiest and longest struggles, represented a displacement of one immigrant people by another, rather than the destruction of a deeply rooted way of life.”