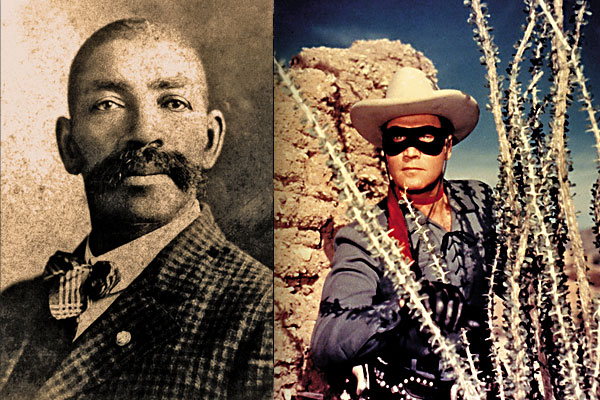 With a budget of $250 million, this summer’s Disney movie, The Lone Ranger, will be the largest of any Western ever made in cinema history. Yet just who exactly was the Lone Ranger?

We know George W. Trendle and Fran Striker created the character for radio in 1933. A lawyer who owned WXYZ in Detroit, Michigan, Trendle wanted to develop a radio series with a cowboy as the hero. He came up with a masked, lone Texas Ranger and then turned the idea over to Striker for further development. Trendle originally gave Striker credit for developing the character. The next year, though, he forced Striker to sign over his rights to the Lone Ranger and Trendle claimed credit as the creator.

The late 19th century saw the storied exploits of a real-life legendary deputy U.S. marshal named Bass Reeves. Several details made him unique. First, he was a former slave in Texas who never learned to read or write. Second, he overcame his handicap of being illiterate by memorizing the warrants and subpoenas he had to administer in Indian Territory (pre-state Oklahoma). Third, Reeves worked for 32 years and became a celebrity during his lifetime. During that era, blacks, whites and Indians were singing songs and telling stories about Reeves’s accomplishments in bringing in outlaws to the federal courts. Last, many of his personal attributes and techniques in catching desperadoes were similar to the Lone Ranger of fiction.

Tonto, from the Potawatomi nation, made his first appearance as the Lone Ranger’s sidekick on the twelfth episode of the radio show (Trendle grew up in Michigan, the traditional territory of the Potawatomi). In the Indian Territory, federal law mandated that deputy U.S. marshals take at least one posseman along to assist in field work. Many times, the possemen who worked with Reeves were Indians or black Indians, such as Grant Johnson. The Lone Ranger left silver bullets as his calling card. Reeves gave folks silver dollars to remember him by. The Lone Ranger worked in disguise, a technique Reeves regularly used to catch unsuspecting felons. The Lone Ranger rode a white horse named “Silver.” Research shows Reeves rode a gray that may have looked white in appearance.

As in Ralph Ellison’s Invisible Man, blacks in the 19th and early 20th century wore an invisible mask in a world that largely ignored them. In that societal sense, Reeves also wore that mask. When the Lone Ranger first started appearing in comic books and movie serials, he wore a black mask that covered his entire face.

One of the most interesting aspects of this correlation is that many of the 3,000 convicts arrested by Reeves were sent to the Detroit House of Corrections. This is the same city where the Lone Ranger character began in 1933. Although we cannot prove conclusively that Reeves was the inspiration for the Lone Ranger, he was the closest person in reality to imbue these characteristics.