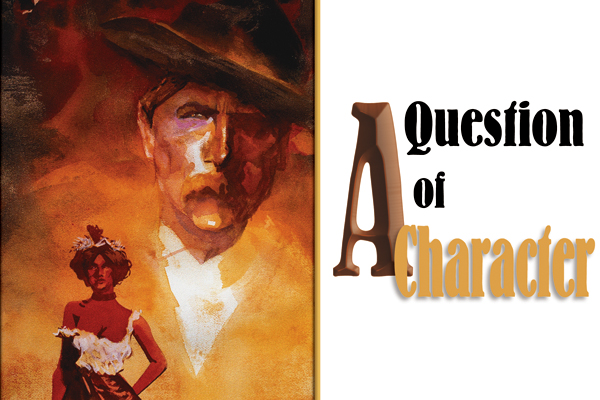 The very question sends Earp apologists into cardiac arrest and Earp critics into high-fives of glee. Now, the question is raised anew with the discovery of historical documents from Peoria, Illinois. But do they mean what they say?

The controversy was recently awakened by David Langenberg, who was looking for information on his ancestors, and found two microfilm articles in the 1872 Peoria Daily Transcript.

The February 27, 1872, article reported: “George Randall, Wyatt Earp and Morgan Earp, three men arrested at the Haspel bagnio [brothel] on Hamilton street, on Saturday evening last, were brought before Justice Cunningham, yesterday to answer to the charge of being found in a house of ill fame. . . . The men were fined $20 each and costs.”

The September 10, 1872, article states in part, “Yesterday was a gala-day as to the number of criminals at the police court. The inhabitants of the Beardstown gunboat [probably a floating bordello] were up for trial and were fined as follows

These articles shed an unexpected light on Wyatt’s whereabouts in 1872—the year Stuart Lake claims in his biography Wyatt Earp: Frontier Marshal, that Wyatt was hunting buffalo. Apparently he was hunting other game.

Gatto followed up on these reports and found Virgil and Wyatt in the Peoria, Illinois, city directories  (Wyatt in 1872-73 and Virgil in 1870-71). Wyatt’s address was the same as the brothel listed in the newspaper article.

Steve Gatto and Allen Barra’s face-off begins on the next page, answering the question:?Was Wyatt Earp a pimp?

Wyatt Earp Was a Pimp.

On a Saturday evening in February 1872, police in Peoria, Illinois, raided a bagnio (brothel) operated by Jane Haspel. The business was located on Washington Street near its intersection with Hamilton. During the raid the officers arrested four women and three men. The arrests were the latest effort of Mayor Peter Brotherson’s police force, led by Chief Samuel L. Gill, to quash prostitution. Two days later, on February 26, a judge fined Morgan and Wyatt Earp, along with George Randall, $20 each plus costs for “being found in a house of ill fame.” The Peoria Daily Transcript of February 27 tells of Wyatt and Morgan’s misdeeds. Almost 60 years later, thanks to Stuart Lake’s book Wyatt Earp: Frontier Marshal (1931), Wyatt would become the most admired lawman of the Old West.

Some may conclude, in light of assertions made in Lake’s book, that Wyatt Earp spent the year 1872 hunting buffalo on the Kansas plains and that Wyatt’s arrest was just bad luck he had during a casual visit to Peoria between hunts. While Morgan’s arrest could be viewed as the result of an ill-timed visit to the bagnio, we cannot excuse Wyatt’s presence there so easily. The 1872-73 Peoria City Directory lists Wyatt as residing on Washington Street, on the bluff side, the third door above Hamilton Street—the same address given for Jane Haspel. Wyatt wasn’t visiting Peoria; he wasn’t a “john.” He was living at Jane Haspel’s bagnio. Thus, a reasonable inference can be drawn that he was intimately intertwined with the brothel, and that he would “steer” men to the bagnio. Men such as Morgan Earp. Therefore, by accepted definitions at the time, Wyatt Earp was a pimp.

Wyatt’s troubles in Peoria didn’t end with his February arrest. Six months later on September 10, 1872, the Daily Transcript reported that Earp had been arrested in a raid on the Beardstown gunboat.

This arrest is most likely the single, largest, successful raid on a bagnio in Peoria during 1872, with 13 people arrested—16 percent of the year’s 83 arrests for the same crime.

Wyatt’s fine from the raid was the highest of the people arrested with him, which included five men who each received a fine of no more than $24, and John Walton, who was fined $43.15. I infer that the court deemed Wyatt and John more culpable than the others, and that Wyatt was the most culpable of the group, with the Daily Transcript singling him out as an “old offender.”

Wyatt’s fine was also almost twice the amount levied against any of the women brought to court with him. (All of the women were fined $24, including “one very young and exceedingly pretty” girl who, according to the police news reporter, was “far too young and pretty to lead any longer the horrible life she has but just commenced.”)

One of the prostitutes from this raid gave her name as Sarah Earp. It’s highly unlikely that Earp was the woman’s real name. Bessie Earp, the “wife” of James Earp ( an older brother of Wyatt), was a madam in Wichita, Kansas. According to 1874 news accounts, the women who worked for Bessie gave Earp as their last names when arrested. Casey Tefertiller talked about the use of the Earp name in his 1997 book Wyatt Earp: Life Behind the Legend: “The assumption must be that the women of the house took the madam’s name to protect their own identity, not an unusual ploy for women in this trade.” The same assumption can be made that women also took the name of their pimp to protect their identity.

The word pimp has been in use since the 1600s. Its common usage relates to providing sexual gratification for others, but the word has broader meanings.

Societal mores about the activities of pimps developed over several decades, and in 1881 these mores finally began to have the force of law: “Whoever, being a male person, frequents houses of ill fame or assignation, or associates with known or reputed prostitutes, or frequents gambling houses with prostitutes, or is engaged in or about a house of prostitution is a pimp. . . .” (Section 2002, R. S. 1881, Indiana). This statutory definition of pimp fits Wyatt Earp’s Peoria activities to a tee.

Steve Gatto lives in Lansing, Michigan, where he practices law and researches Tombstone history. He is the author of The Real Wyatt Earp and Johnny Ringo.

“Historians,” as Poor Richard’s Almanac reminds us, “often relate, not so much what is done, as what they would have believed.” A great deal of Old West history, particularly that relating to Wyatt Earp, fits neatly under Poor Richard’s dictum.

For instance, consider the assertion that Wyatt Earp was a pimp. Such a notion does not derive from any known period statements in newspapers, letters or legal documents. It derives from what later historians, who for one reason or another did not like Wyatt, would have believed.

The latest manifestation of this argument is that Wyatt was a pimp because he was arrested in a brothel where he was supposedly living while in Peoria, Illinois; that his younger brother was with him; that he was fined more than other “johns” and that a girl named Earp was also arrested.

First, Wyatt’s address: the census more than likely listed Wyatt as a resident at the bordello because it was where he was living. Yet, I don’t think that he spent much time in Peoria.

Second, the matter of the brother: I have no idea what Morgan Earp was doing there, and neither do other historians. None of us has a clue what Morgan’s presence has to do with whether or not Wyatt was a pimp.

Third, the fine: to know exactly what the fine was for an average john of the time and place would require a great deal more research than has been done. The fine was always related to the nature of the offense, and in this case we really don’t know what was the offense. Why Wyatt Earp was fined more than someone else found at the same establishment may have to do with him being a repeat offender.

Fourth, the Earp girl: it was common in the period for prostitutes to refuse to give their real names to authorities when arrested, according to George Riley Scott in his definitive work A History of Prostitution From Antiquity to The Present Day (which, by the way,  supplied most of the historical backdrop for the novel The Presbyterian Church Wager, which became the film McCabe and Mrs. Miller). Prostitutes often gave the surname of either their beau or john. And why would Wyatt, if he was a pimp, advertise it by giving his name to a prostitute?

So, what was he doing there in the first place? Well, we simply don’t know. But to assert that he was a pimp is to fly in the face of virtually all our knowledge of prostitution in that time and place. As Scott explained,  “Prostitution in a thriving American town was as much of a complex business venture as building a cattle ranch or a shipping business. It required a substantial capital outlay as well as knowledge of and influence in the particular town where the enterprise took root.”

Wyatt Earp had no capital to speak of and scarcely spent any time in Peoria, Illinois. The notion that a part-time buffalo hunter or boxing referee or whatever Wyatt was around that time could walk into a town the size of Peoria (which was a bustling city with a trade economy) and suddenly appear a short time later as an established pimp is somewhat nonsensical because, at the very least, he could have found better places to “pimp” than one that was a relatively short distance from where much of his family lived. (Why not Ellsworth, Wichita or Dodge City? Why not, for that matter, California?)

Why Wyatt was living at the same address as the brothel we may never know. I submit that a logical answer in this case is that Wyatt Earp was doing in Peoria pretty much what he did on a more respectable level later on in Wichita, Dodge City and Tombstone. Namely, he was serving as a bodyguard and strong-arm man for capitalistic interests—or, in the more common parlance in brothels of this period, a bouncer. And cracking a few heads of rowdy customers in a house of ill repute was probably excellent on-the-job training for frontier law enforcement. It was, after all, the kind of work Wyatt did best.

Allen Barra is a sports columnist for the New York Times, a contributing writer for American Heritage magazine and the author of Inventing Wyatt Earp.