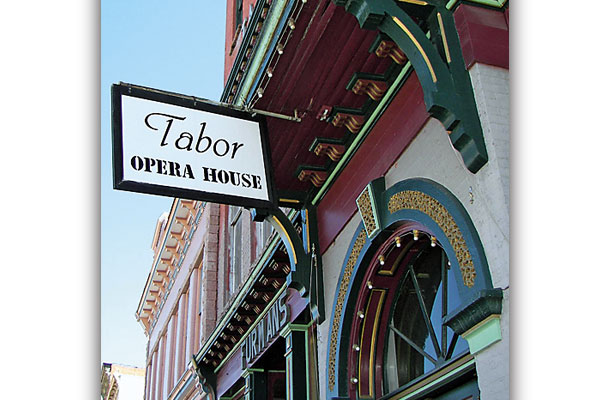 1. Called the “Smithsonian of the Rockies,” the National Mining Hall of Fame and Museum offers up a prospector’s cave and a 23-oz. gold nugget from Leadville’s legendary Little Jonny Mine developed in 1879. 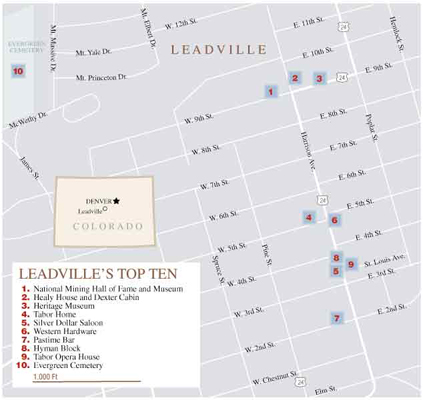 2. The 14-room Healy House features lavish Victorian furnishings and objects belonging to former governors Horace Tabor and Jesse McDonald. You will be awed when you step into the 1879 log cabin James V. Dexter built for entertaining his poker buddies.

3. At the Heritage Museum, be sure to check out the model of Leadville’s famed 1896 Ice Palace and the displays honoring the 10th Mountain Division.

4. Ex-President Ulysses S. Grant was once a guest in the modest Tabor Home, which belies the fact that, in 1880, Horace Tabor was one of the nation’s wealthiest and influential men. A scandalous love triangle involving Tabor ended in divorce from his first wife and marriage to the beautiful Baby Doe. The repeal of the Sherman Silver Purchase Act in 1893 would later cost him his fortune.

5. Belly up to the Silver Dollar Saloon’s ornate oak bar for an Irish coffee and stroll around the back room to see the historic photos. See if you can find the photo of the hanging!

6. Western Hardware, first opened in 1881, is now an antique mall where you are sure to find a treasure or two you can’t live without.

7. There were once 64 bars on State Street, now 2nd Street, and the Pastime Bar is the last but lively survivor. Slide into a wooden booth and order up one of its legendary hamburgers with fries. Don’t forget to check out the diamond-dust mirrors on the walls.

8. Hyman Block is the place where notorious gunslinger Doc Holliday shot Billy Allen in 1884, marking the last gunfight for Holliday, who would die of tuberculosis three years later. He was acquitted, and Allen recovered. The saloon’s tin ceiling is still intact.

9. Built by Horace Tabor in 1879, the Tabor Opera House, once billed as the finest theatre between St. Louis and San Francisco, saw stage performers such as Harry Houdini, John Philip Sousa and Oscar Wilde. Performances and tours are held throughout the summer. Its second-story museum contains artifacts and furniture used by the Tabors, as well as other Victorian relics.

10. One of the most famous headstones at the 1879 Evergreen Cemetery was donated by Buffalo Bill Cody for his partner in the Wild West shows, Texas Jack Omohundro, who died in Leadville from pneumonia a month before his 34th birthday.

Jo Ann Stuever moved with her family to Leadville from Florida in 2005 and opened the Governor’s Mansion Guest Suites, the former home of Gov. Jesse McDonald.