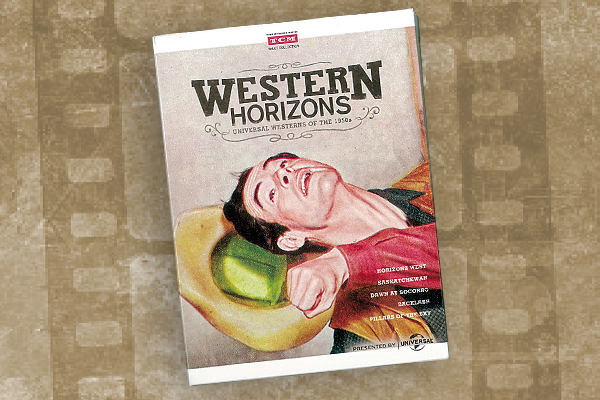 Anthony Mann and James Stewart’s directorial collaborations, beginning with Winchester ’73, are usually considered the ultimate of Universal Pictures’ Westerns. Narrow critical focus on those films has shortchanged the studio’s other superior Westerns, a slight justly corrected by this five-disc set.

Saskatchewan (1954): This muscular, Raoul Walsh-directed adventure about the Canadian Mounties is a solid vehicle for Alan Ladd, post-Shane. Shelley Winters is the good/bad girl, and Hugh O’Brian is the fugitive on the run. The real star is the amazing Canadian scenery and Walsh’s unswerving ability to stage tough action.

Dawn at Socorro (1954): Republic veteran George Sherman directs with deceptive ease, and Rory Calhoun is impressive as a gambler who can’t escape past crimes. Piper Laurie is the lady of the piece, while David Brian and Lee Van Cleef add villainy.

Backlash (1956): Written by Borden Chase (Winchester ’73), directed by John Sturges (The Magnificent Seven) and starring Richard Widmark and Donna Reed, Backlash is the major “A” film of the set, but an oddly flat one. The harsh drama and some impressive widescreen action just don’t mesh, even with Widmark’s performance as a driving force.

Pillars of the Sky (1956): Interesting George Marshall Western about a cavalry officer who steps away from the Army to devote himself to ministry. Based on a novel by Will Henry, Pillars of the Sky takes its drama in an unexpected direction and features sterling work by Jeff Chandler and a subdued Ward Bond.

The glories of the Technicolor photography of these films has been beautifully preserved and have never been presented in a more satisfying collection.