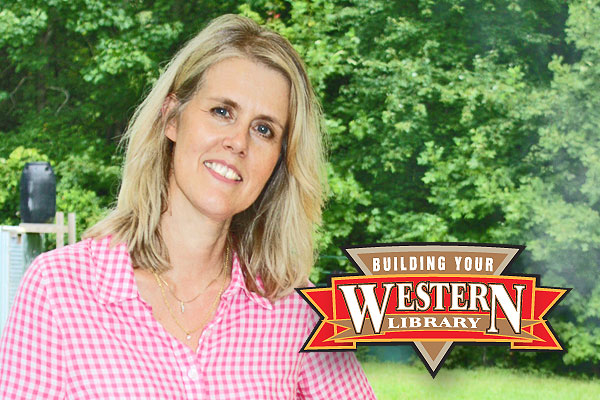 Sherry Monahan admits she didn’t read her first Western until she was in her thirties—she was hooked on Agatha Christie. A native of New Jersey, she credits her father’s love of all things Western, to her lifelong fascination with the West.

She grew up dreaming of being a chef and owning her own restaurant. Monahan may not have become a chef, (she became a corporate policy writer and later a marketing professional for more than two decades) but her passion for food has translated into her expertise: Western food and cooking culture (see her monthly True West column “Frontier Fare”). Her 11th and most recent book is Frontier Fare: Recipes and Lore from the Old West (Globe Pequot), which expertly combines her passion for culinary and Western history.

Sherry guarantees you will love these five great books.

1 A Thief of Time (Tony Hillerman, Harper & Row): My best friend in New Jersey gave me Hillerman’s classic, my first Western. Hillerman’s detail of the Southwest, the culture and lore of the native peoples, and a great mystery captured my attention. That book sent me on a quest to read more of his books.

2 She Who Remembers: A Novel (Linda Lay Shuler, Arbor House Publishing Company):  Shuler introduced me to a more historical setting of the Anasazi, their culture and struggles. The main character is Kwani, a strong woman who struggles for respect among her people. Her special talents and rare blue eyes make her a target for jealous women and fearful tribal leaders. It’s also a great romance.

3 These is My Words: The Diary of Sarah Agnes Prine, 1881-1901, Arizona Territories: A Novel (Nancy Turner, Harper): This historical fiction reads like a real diary and I could see myself as a character in her book. Turner was able to weave a wonderful story around her ancestor Sarah Prine. Sarah was a survivor and a woman with an independent mind. There is also a nice romantic element to this book.

4 The Writer’s Guide to Every Day Life in the 1800s (Marc McCutcheon, Writers Digest Books): Once I started writing, I purchased Marc’s book. It’s filled with great reference material, terms of the period, and an interesting read for writers and readers alike. This book is not only good for writers who want terms, lifestyle and other details, but anyone interested in old customs and terminology will enjoy this.

5 Gone with the Wind (Margaret Mitchell, Scribner): My all-time favorite book. Margaret Mitchell’s prose, her ability to take the reader back in time, and the characters are colossal. Like the pioneers who traversed the West, Mitchell’s characters learn to survive amid tough conditions. If you don’t already have this one on your shelf, go get it now! This book is epic and the characters are larger than life. Being taken back to the South of the 1800s is both frightening and exciting.