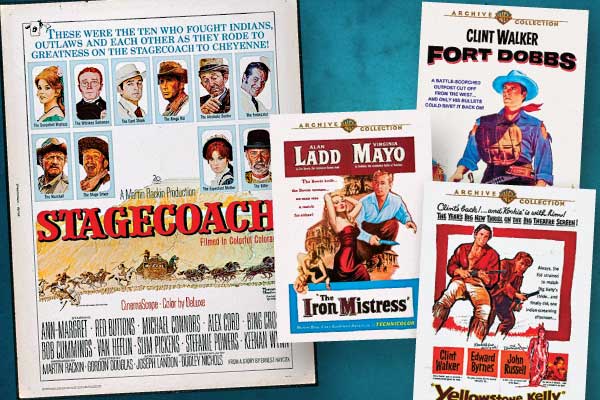 Doolins of Oklahoma (Columbia, 1949): The first of Douglas’s two movies with Randolph Scott is an okay attempt to tell the true story of ex-gunslinger Bill Doolin trying to go straight.

The Great Missouri Raid (Paramount, 1951): This low-budget Nat Holt Western about the James brothers was well directed by Douglas, with a good, solid cast of contract stars. Frank Gruber adapted his own novel for the film, which was shot quickly and moves just as quick.

Only the Valiant (Warner Bros., 1951): One of Gregory Peck’s least favorite films of his career, this grim cavalry Western has a great supporting cast (Ward Bond, Gig Young, Lon Chaney) and stunning, unforgiving black-and-white cinematography by Lionel Lindon. Here, as in 1968’s The Detective with Frank Sinatra, Douglas can’t sublimate his bleak world view when examining men of violence. The film is underrated, especially by its star.

The Charge at Feather River (Warner Bros., 1953): Warner Bros. was cornering the market on 3-D Westerns, with this and Hondo, the box office champs. James R. Webb (How the West Was Won) wrote the script that piles on the clichés, but it works as a lively, jump-in-your-seat Oater. Watch out for those arrows!

The Big Land (Warner Bros., 1957): A Warner Bros. “mini epic,” The Big Land was decent and well-made, with Ladd in good form, but the film’s energy comes from the great Edmond O’Brien. Mayo is again teamed with Ladd.

Fort Dobbs (Warner Bros., 1958): Another tough, black-and-white favorite, Fort Dobbs was used to burn through the contracts of Mayo and Douglas, and they scored with an unusual Western “noir.” The spare, interesting script by Burt Kennedy casts Clint Walker as a fugitive on the run and Mayo as a sexy widow he decides to help out.

The Fiend Who Walked the West (Twentieth Century-Fox, 1958): This notorious Western reworking of 1947’s Kiss of Death showcases future movie mogul Robert Evans crawling the walls as the psycho gunning for Hugh O’Brian and his family. This film is a slap-in-the-face blend of Horror and Western, but fun.

Yellowstone Kelly (Warner Bros., 1959): A popular Clint Walker vehicle with a script by Burt Kennedy, Yellowstone Kelly was intended for Wayne and Ford, but the movie found its way down the Warner Bros. contract line as a way to show off its TV stars on the big screen.

Rio Conchos (Twentieth Century-Fox, 1964): Douglas’s rough masterwork is the best Western of his career. Stuart Whitman, Jim Brown and Tony Franciosa team with Richard Boone’s near-insane character to confront a renegade colonel (Edmond O’Brien) who is trying to restart the Civil War. Clair Huffaker wrote the tough script from his novel, which echoes his own The Comancheros script he cowrote three years earlier. Rio Conchos is as raw as a third-degree sunburn.

Stagecoach (20th Century-Fox; 1966): Vilified when released, Douglas’s take on “The Stage to Lordsburg” isn’t a complete misfire; it’s just not Ford’s Stagecoach, and that burden nearly crushes it. In making the film his own, Douglas took a brutal approach that distances this version from Ford’s poetry. William Clothier’s cinematography feels overlit and visually confrontational. Alex Cord’s Ringo Kid is colorless, although Bing Crosby shines as the drunken doctor. This was an interesting failure.

Chuka (Paramount, 1967): Rod Taylor starred in this Western based on Richard Jessup’s novel. Claustrophobic, with a brutish performance by Ernest Borgnine and fine acting by John Mills, the film is intriguing, but bleak.

Barquero (United Artists, 1970): This bloody vehicle for Lee Van Cleef costars the great Warren Oates. Douglas could have directed this in his sleep, but he brings his skills and energy, particularly for the shoot-out in a stable.

Nevada Smith (MGM, 1975): This series pilot stars Cliff Potts as the lead character, taking over the role from both Steve McQueen and Alan Ladd. Working from the original John Michael Hayes script, this reworking of the Hathaway film is an indifferent footnote to Douglas’s career out West, which had some true highlights.