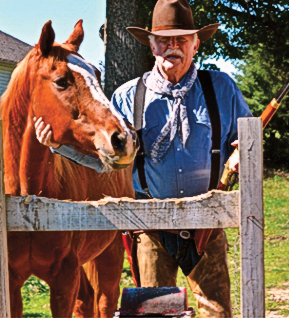 The father of six kids, Don Collier is well known as a Westerns actor. He broke into the genre in 1948, graduating from an extra in Massacre River to acting in the John Wayne flick, Fort Apache. In the 1960s, he earned the lead role in NBC’s Outlaws, following that up with appearances in other shows, before getting cast as the ranch foreman in the long-running The High Chaparral series. Next year, on March 17-19, in Tucson, Arizona, Collier plans to reunite with cast members for the 50th anniversary of The High Chaparral.

My character on The High Chaparral was not supposed to be Bobby Hoy’s character’s younger brother. But when we filmed it, I called him my younger brother, and Director Bill Claxton said, “Guess what? He is your younger brother now ’cause I’m not shooting the scene again.”

On NBC’s Outlaws, I learned never to let your costar pick out his own spurs. Bruce Yarnell put on some big Mexican rowels. Away he went, and those spurs almost got him killed!

I became a 1980s icon as “Gumfighter” in the Hubba Bubba commercial for Wrigley’s gum. I was the bubble gum-toting sheriff who got the bad guys by blowing bubbles for eight years, and I made $700,000.

My “Pick up the Pace” Pace Picante commercials happened because they liked the way I delivered the line.

While serving in the U.S. Navy, I cut one of my fingers off in an accident aboard the USS Astoria, a light cruiser. It happened in the handling room of a 5X mount (a cannon). The breach caught my middle finger, right hand. That’s an important finger, you know.

I got in the movie picture business through Francis Lederer, a European actor who did quite well in Hollywood. When I got out of the Navy in 1946, I worked on his San Fernando Valley ranch, branding calves and horseback riding.

On a John Wayne movie, after the director yelled, “Cut,” you never left the set. I liked working with Wayne, and he was a taskmaster, but you’d better know your lines and show up on time. When the director yelled, “Cut,” you didn’t leave; you stayed by the camera. That was Wayne’s work ethic; you followed that ethic. I’ve always admired him for that.

Elvis Presley pushed me into a dessert cart in a movie called Paradise, Hawaiian Style.

I had a football scholarship in 1949, in Abilene, Texas; I only lasted one season. I played left end. I was good at it, but I wasn’t any kind of a scholar.

I didn’t kiss many women on screen, but I sure enjoyed kissing Rhonda Fleming. That was on Death Valley Days!

My favorite acting experience was The High Chaparral, because it functioned like a working ranch and it was like a real family. It lasted four seasons. I wish it had been 10, but I’ll take it.

I just watched The Revenant, and I thought it was fantastic. That young fellow— DiCaprio—was just excellent, and the movie deserved every award it got.

Fred Imus was a great guy, and I worked with him on Fred’s Trailer Park Bash radio show for about five years. He was a terrible slob though and left trash all over his trailer. But he was a pretty good slob!

Nobody knows that I like working with a wood lathe. I make plates, lamp bases and dishes. I mostly use mesquite wood that is native to Arizona. It makes me happy.

A project I am working on now is called “The West of the Story,” about 19th-century events—stagecoach robberies, bank robberies,  hangings and that sort of thing. I’m almost 88 in October, so I better get it done.