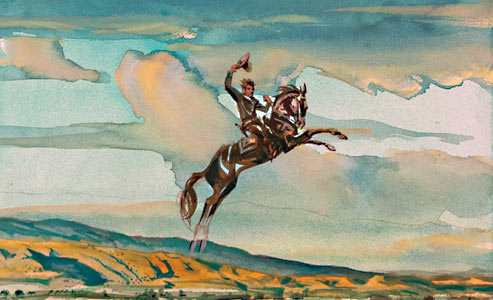 One hundred thirty-four years have passed since Billy the Kid’s daring escape from the Lincoln County jail in New Mexico Territory. Sixty-three years have passed since two researchers discovered documents confirming the Kid’s real name. Their findings have been the “rock upon which almost everything written about the Kid’s life has been founded,” says Fred Nolan, one of the foremost authorities on the Kid.

But as new findings by Nolan and other Kid enthusiasts reveal, the Kid’s long ride shows no sign of ending anytime soon. “What if everything we know about Billy the Kid is wrong?” Nolan asks. He starts off our journey by sharing how the only person who got the outlaw’s story straight was the Kid himself.

BELIEVE BILLY
If you want to know the truths in Billy the Kid’s story, look to the outlaw himself.

Nearly everything we know about Billy the Kid is either remembered or invented.

For example, one story of the Kid’s murder trial in April 1881 has the judge telling the defendant that he was going to be taken to Lincoln, New Mexico, and “hanged by the neck until you are dead, dead, dead,” to which the Kid jauntily replied, “And you can go to hell, hell, hell.”

Yet the historical record shows the Kid did not speak after his sentence was read. Nonetheless, this story—and a great many more like it—pops up now and then, never quite dead.

So, who can we trust? Surprising as it may seem, the only one who appears never to have once lied about his life was the Kid himself (his alias may have been his only falsehood).

Yes, out of all the millions of words that have been written about him, the only reliable evidence of what he actually said are: his four-page, 1878 account for Frank Angel on John Tunstall’s murder, his 1879 testimony at the Dudley Court of Inquiry, his notes and letters to Gov. Lew Wallace and to his lawyer Edgar Caypless and—although these, too, are iffy—his “interviews” with newspapermen Lute Wilcox in Las Vegas and Simeon Newman in La Mesilla.

All these accounts have one thing in common: no whines, no frills, no B.S.

Take the Kid’s account of the killing of Tunstall, dictated to Juan Patrón for the Angel report, in which the Kid is identified as “deponent:” “Deponent had not more than barely reached [Dick] Brewer and [Rob] Widenmann who were some 200 or 300 yards to the left of the trail when the attacking party cleared the brow of the hill and commenced firing at him, Widenmann and Brewer. Deponent, Widenmann and Brewer rode over a hill towards another which was covered with large rocks and trees in order to defend themselves and make a stand. But the attacking party, undoubtedly seeing Tunstall, left off pursuing deponent and the two with him…. Shortly afterwards [the men] heard two other separate and distinct shots, and the remark was then made by [John] Middleton that they, the attacking party, must have killed Tunstall.”

You get just the facts, nothing more, nothing less.

Quotes by others of what the Kid supposedly said or did range uneasily between folklore and fiction.

Everyone knows now that he didn’t shoot a man dead in Silver City for insulting his mother, but earlier generations readily believed Ash Upson’s tall tale.

On an even more spectacular occasion, did the Kid really throw that shotgun at Bob Olinger’s shattered body and snarl, “Take that to hell with you!”? Maybe he did scream and curse, maybe he did snarl at Olinger’s corpse—but who jotted it down? Someone who was there? Someone who heard about it after the event? Or worse still, someone who just…made it up?

Much later in his short and violent life (even book titles don’t always play him fair) the Kid was still—when and if opportunity made it possible—not just honest, but sanguine about his own predicament, as in this (admittedly secondhand) snippet from a newspaperman’s “interview” outside the jail in La Mesilla:

“He appeared quite cheerful and remarked that he wanted to stay with the boys until their whiskey gave out. Said he was sure his guard would not hurt him unless a rescue should be attempted and he was certain that would not be done unless perhaps ‘those fellows over at White Oaks come out to take me,’ meaning to kill him. It was, he said, about a stand-off whether he was hanged or killed in the wagon. The Mesilla jail was the worst place he had ever struck. The sheriff wanted him to say something good about it when he left but he had not done so. He wanted to say something about John Chisum and it was some satisfaction to him to know that some men would be punished after he had been hung [sic].”

That, I suggest, is pretty self-controlled for a 21 year old, especially one handcuffed, shackled and chained to the back seat of an ambulance and “informed” that if anyone tried a rescue attempt, he would be shot first before his guards went after the attacking party.

Out of the hundreds—thousands—who have written about the Kid, nobody who knew him tried hard to find out more about his true identity. Because of that, he has no backstory: he did not talk much about his childhood. Where and when was he born? Where did he spend the first 10 years of his life? What were his father’s name and occupation?

Yet, I am convinced that we can still discover more truths about the Kid, even though he is no longer here to tell us. The research I share on True West Magazine’s website may be the beginning of us truly getting to know the man behind the outlaw.

Read Fredrick Nolan’s “The Birth of an Outlaw”