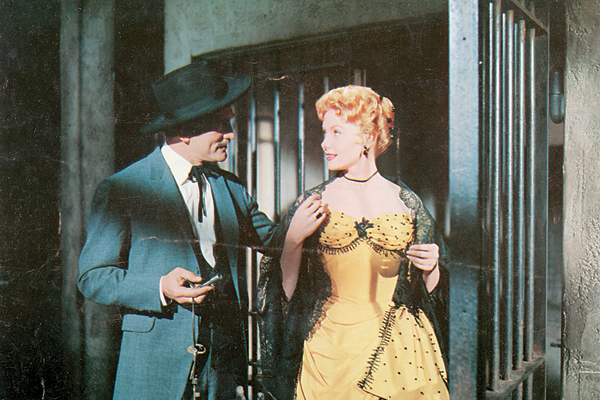 Just what was it about this sickly, hacking, drunken, abusive, hotheaded, bed-jumping dentist that makes Doc Holliday so sexy?

More than one man has asked that question over all these years; more than one woman has secretly known why.

But even Hollywood saw this character—whether he was fraudulently killed off at the O.K. Corral or not—as someone with a romantic aura.

Consider the men who have portrayed him on the silver screen, including Victor Mature (playing a beefy version of the skinny Doc); Kirk Douglas (who brought sex to every role he was ever in); Dennis Quaid (how could Meg Ryan ever . . . oh well) and Val Kilmer (who is a modern-day heartthrob).

Maybe his sex appeal is the age-old “take care of him” syndrome. After all, the guy was dying from tuberculosis and was sickly much of his adult life. That kind of weakness appeals to some women. Maybe it’s that he was so Shakespearean,  sort of a walking tragedy. Maybe because he used such colorful language: “I’m your Huckleberry,” which is far more poetic talk than you hear from most men. Or it could be that when Wyatt Earp gave him a pass to skip the confrontation near the O.K. Corral, Doc insisted on sticking by his friend—a lofty reading of history that has more to do with Hollywood romanticism than with Doc’s itchy trigger finger. (He wouldn’t have missed that fight if he had needed a wheelchair to get to it.)

And we’re guessing John Henry Holliday would have smiled at the words from Kate, the woman he loved. She noted he was a “neat dresser, and saw to it his wife was dressed as nicely as himself.” And, she pointed out, his natty clothes went along with his “very pretty mustache, blue-grey eyes, and a fine set of teeth.”