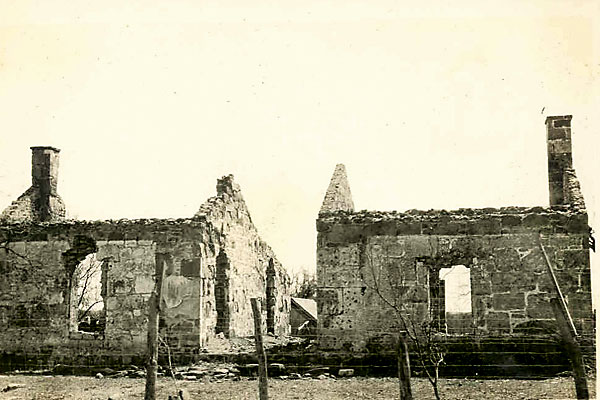 Since October 1877, Fort Chadbourne, north of Bronte, Texas, has been the same family’s ranching headquarters. Known then as the OD Ranch, Thomas Lawson Odom and his son Garland bunched 36,000 beeves and utilized the fort as their headquarters.

Enter Garland Richards (Odom’s great-great-great grandson) and his wife Lana, who determined to make something of the frontier fort on their 30,000-acre ranch where they originally ran 3,000 black, bald faced Angus-Chianina.

Garland’s father, Conda, had always wanted to preserve the fort.Garland and Lana got the opportunity to fulfill his dream in 1999, when a modest inheritance allowed them to create the Fort Chadbourne Foundation and commit themselves to restoring the fort every day.

Garland was not worried about restoring the buildings himself, but he didn’t know how to manage the upkeep once he had to return to his ranching duties. He knew a state or federal agency was unlikely to take over the responsibility. In the 1970s the family had tried to donate the fort to the Texas Parks and Wildlife Department, but the state passed. Officials advised them that preserving the fort would be too costly and difficult for the family to accomplish on their own. Garland took this as a challenge. “The best way to motivate me is to tell me I can’t. I decided I could,” he says.

While Garland and Lana worked to restore the buildings, visitors donated money to help the ranchers succeed in their preservation endeavor. Included among those unsolicited donations was a generous amount for the construction of a 12,500-square-foot visitors’ center due to open in mid-September 2011. Its exhibits will share the guns, cannon and other fort artifacts, as well as family heirlooms.

Garland and Lana are proud of their work. “My family will never recover the money spent on this,” Garland admits, “but it needed to be done, so we did it.”

The Chadbourne Ranch still leases property for a respectable Angus herd, but the Richards family focuses on the fort and sharing its history with visitors; the fort is open daily to the public, with private tours available by appointment. When asked what advice he has for others who have a historical site on their property, Garland laughs and says, “Keep ranching.”

Alan C. Huffines has his BA and MA in history. He is an eighth-generation Texan, board member of the Texas Forts Trail, a retired U.S. Army colonel and gunsel novelist. He makes his home with his wife Caroline and their four children in Buffalo Gap, Texas. Visit AlanCHuffines.com for more information on the author.