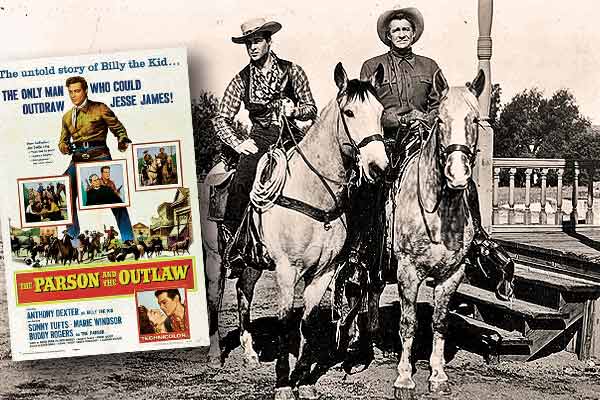 Casting a woman in a male role makes sense. After all, Linda Hunt won an Academy Award as Best Supporting Actress for her performance as an Indonesian man in 1982’s The Year of Living Dangerously. Besides, look at that tintype of Billy the Kid and then read the descriptions of him: “slightly built and lithe,” “really girlish looking.” If you were making a movie called Billy the Kid, why not cast an actress in the lead role?

When I began researching my book Billy the Kid on Film, 1911-2012, I thought—like most other film historians at the time—that the first actor to play Billy the Kid in a movie was Tefft Johnson, a leading man on stage before turning to the fledgling film industry. Although Johnson was too big to be the Kid, consider the later actors who played the outlaw: Bob Steele, Don Barry, Scott Brady, Anthony Dexter, Chuck Courtney and Michael J. Pollard.

Turns out, Johnson didn’t play the Kid at all. The lead role went to an accomplished actress, Edith Storey.

Like far too many movies, Billy the Kid, a one-reel short released by Vitagraph in August 1911, is presumed lost. Records of the silent film era are scant, but I discovered two newspaper accounts of the movie’s plot.

The Sheboygan Journal in Wisconsin stated the Kid “leads the life of a cowboy until she is sixteen years of age, when her sex is discovered through an encounter with a band
of outlaws….”

The Hamilton Evening Journal in Ohio was more succinct: “Billy the Kid is a boy until sixteen years of age then she becomes a girl and marries a cowboy.”

America’s first “cowgirl” film star, Storey was a fantastic actress who had played Oliver in 1909’s Oliver Twist. In 1914’s A Florida Enchantment, her character takes a pill that transforms women into men and vice versa. She also portrayed a number of tomboys called Billy. “When it is necessary for me to play male characters,” she said, “I am always careful to make them just as masculine as possible.”

Okay, so Billy the Kid isn’t really about the Kid, but Hollywood has never been known for historical accuracy—even before Hollywood existed (most Vitagraph films were shot in Brooklyn, New York). Nor was that 1911 short based on Walter Woods’s popular play of the time, “Billy the Kid,” which, likewise, strayed far from the truth. The only other known Kid silent, a 1916 one-reeler called Billy the Bandit and also presumed lost, wasn’t about the Kid either. The first movie to follow the real story of the Kid, loosely speaking, was the 1930 talkie Billy the Kid, directed by King Vidor and starring Johnny Mack Brown.

Storey, however, was a much better actor than Brown. Having seen Storey in A Florida Enchantment, I wish her 1911 one-reeler was available today and that 1957’s The Parson and the Outlaw, which stinks, was lost. But luckily, thanks to a 2010 discovery in the New Zealand Film Archive of Storey playing another Billy, we get a chance to see her in the role.

In a 1911 short released before the Kid picture, Billy and His Pal, Storey plays Billy who saves his cowpuncher friend—played by Francis Ford, the older brother of yet-to-be-director John—from Mexican bandits and helps him reconnect with his lady friend. Interestingly, in the Billy the Kid short, Storey’s Kid is discovered in his teen years as a girl in disguise. What happens? “Billy” ends up marrying her pal.

Johnny D. Boggs’s favorite Billy the Kid movie is 1948’s Four Faces West, even if the Kid is already dead when the movie begins.