When Cowboys Became Ostrich Boys With a head-em-up, move-em-out and a yippie-ti-yi-yay, cowboys, became ostrich boys, were actually driving herds of ostriches... 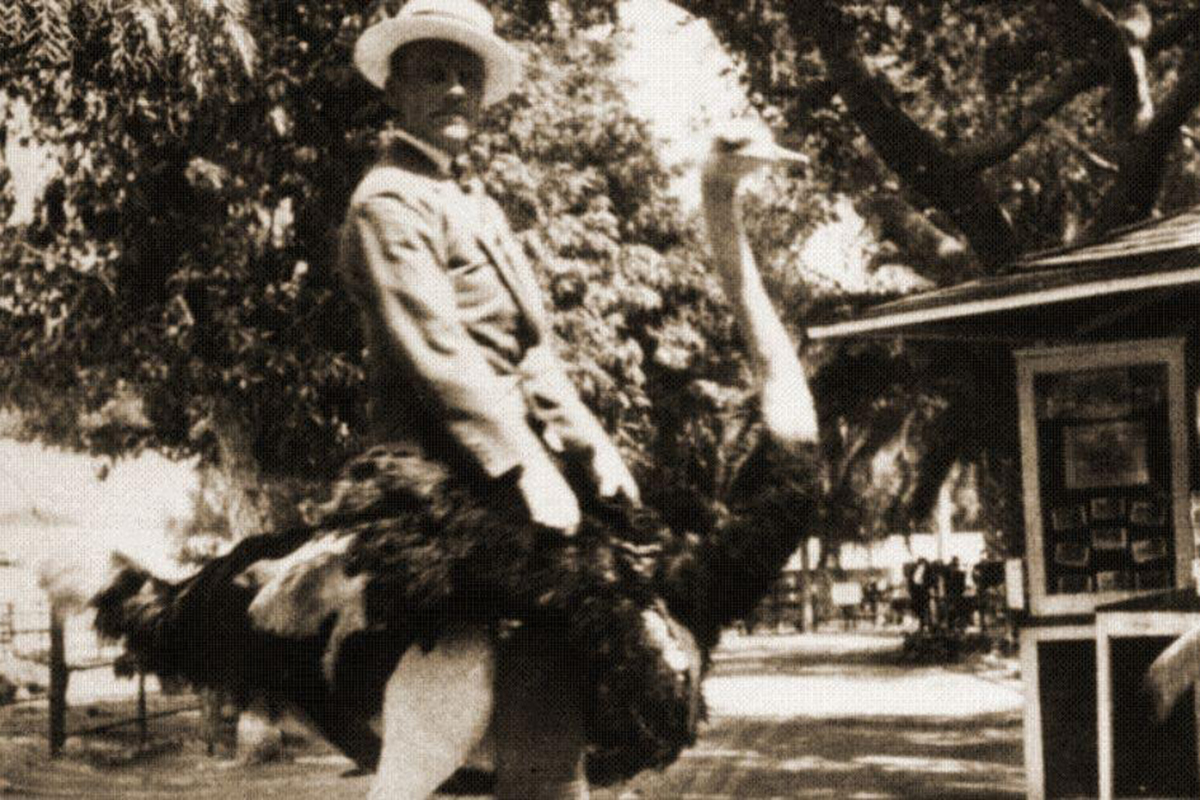 One of the most unusual yet lucrative types of ranching came into fashion in the late 1800s. With a head-em-up, move-em-out and a yippie-ti-yi-yay, cowboys, became ostrich boys, were actually driving herds of ostriches.

It wasn’t that the cattle business had fallen off so much but rather women’s fashions of the time dictated the wearing of ostrich feathers on hats and dresses. Those die-hard cattlemen who had originally scoffed at such an enterprise no doubt reconsidered when it was reported in 1910 that 4,023 ostriches were sheared of their feathers and the crop was valued at $1,365,000. Ostrich ranches became as common as convenience markets are today.

The first ostriches arrived in Phoenix from California in 1885. Prior to their shipment their bald heads were covered with hoods to discourage escape and perhaps escape sunburn. Of the two adults and eleven chicks that started the trip, only one adult and one chick survived the desert crossing. Luckily, one was male, the other a female and soon eggs began to hatch. One man paid more than $16,000 for twenty-one pairs of breeding birds. Two years later he had realized some $31,000 from the sale of young chicks. Ostrich feathers were selling for around $75. a pound. The ostriches required less water than did other types of livestock and whereas full-grown cattle ate from 30 to 60 pounds of alfalfa a day, an ostrich ate only 4 pounds. Ostriches also sold for more than cattle. A young chick cost $100 and an adult went for around $800. An adult ostrich might weigh from 300 to 400 pounds and stand 8-feet tall. They could run up to 60 mph, taking 25-foot strides. They could leap over a six-foot fence with little or no effort. The ostrich had about the same disregard for fences as they did for their valuable eggs, which they sometimes stepped on or kicked like soccer balls.

Since the success of the business depended on the number of ostriches produced, the eggs were prized. Hired hands with long shepherd-like staffs gathered the eggs for incubation.

The ostrich also provided the farmers with eggs and meat.  One egg was equivalent to 33 hen’s eggs. The eggs were good but the meat was coarse and stringy. Equipped with a brain the size of a pea, ostriches weren’t the sharpest knives in the drawer and must be placed at the bottom of the scale of vertebrae intelligence.

The industry was not without its hazardous moments. In 1914 a couple suffered fatal injuries when their horse and buggy collided with a herd of stampeding ostriches.

It was women’s styles that created the boom and she that giveth can also taketh away. Women’s fashion was as fickle then as it is today and in 1916 feathers were no longer in and the business died as quickly as it had begun.

With the market closed, most of the ostriches were ground up, feathers and all, into fertilizer. However, like the camel of an earlier era some either escaped or were released to roam free in the desert—their fate somewhat prolonged.