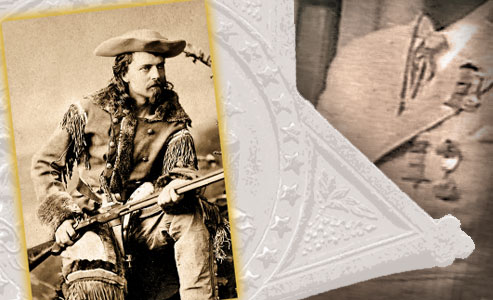 For his Buffalo Bill’s Wild West show, Cody and his promoters frequently enhanced stories from his days in the Pony Express, Civil War and buffalo hunting, and some details of his scouting life with the U.S. Army aren’t entirely true. Entertainment was almost always paramount to truth with Cody.

What is true is that Cody was awarded the Medal of Honor from a skirmish with Sioux Indians in Nebraska. Four years after his death in 1917, his family put the medal on display at the Buffalo Bill Museum and Grave on Lookout Mountain, outside of Denver, Colorado.

In 1983, however, another Medal of Honor appeared, inscribed to Cody for the same fight and backed by strong circumstantial evidence. That medal was acquired by the Buffalo Bill Historical Center (today’s Buffalo Bill Center of the West) in Cody, Wyoming. Thus began a new mystery concerning the legendary scout: Who has Buffalo Bill’s Medal of Honor?

In 1872, Cody served as a scout with the 3rd Cavalry at Nebraska’s Fort McPherson on the Platte River. After a band of Minneconjou Sioux raided a nearby depot and stole some horses, he and a company of cavalry were sent to chase them. Following their trail north, Cody found the Indians camped on the South Fork of the Loup River, near today’s Stapleton.

With a sergeant and 10 men, Cody covered the south bank of the stream while the rest of the troopers went north. His group closed in on the Sioux and charged, with Cody killing one and the troopers two.

The cavalry commander submitted the names of Cody and three of the enlisted men for Medals of Honor. General Phil Sheridan and the War Department received and approved the nominations, and the medals were mailed to the men.

In Cody’s time, the Medal of Honor didn’t hold the stature of today’s medal. It was the only medal offered by the Army in 1872, and it was bestowed to soldiers and civilians alike for reasons beyond valor—one of the troopers with Cody was awarded the medal simply for following orders promptly and cheerfully. Cody never talked much about his medal, feeling it was more for his Civil War and Indian War service, but he highlighted it on an 1888 promotional poster.

The War Department tightened the criteria for the Medal of Honor in the 1890s, limiting claims to officers and soldiers. It went a step further in 1916 by reviewing previous recipients; one month after Cody’s death in 1917, the review board stripped the medal from Cody and other civilians.

“Those recipients were asked not to publicly display the medals,” says Steve Friesen, director of the Buffalo Bill Museum and Grave, “but after Cody’s death, the Cody family did share his medal with the public at Johnny Baker’s museum on Lookout Mountain.”

The medal was featured in a Denver magazine in 1920 as one of the Cody artifacts to be displayed at the new museum, opened by Cody’s foster son, Johnny Baker, and the City of Denver.

Paul Fees, who acquired the medal as the museum’s then-curator, believes it was given by Cody to a Pennsylvania family not long after he received it. That family—the Gusses of West Chester—received a visit from him in the winter of 1872.

Fees says the Gusses were “sort-of” grandparents and cousins on Cody’s mother’s side resulting from remarriages: “I believe that Cody gave the medal to the Guss family patriarch or to his cousin Lizzie. Cody called her, in his autobiography, the ‘most beautiful girl I had ever seen.’”

The collector told Fees he had purchased the medal from an estate sale in Chester County, but declined to name it. Fees knew estate sales had been held in the county for both the Guss family and the Charles Trego family, which also knew Cody.

“A fellow curator told me the inscription should include the name of the person, the rank, and the date and place of the action, all of which this had,” Fees says.

After the collector offered the medal to the museum, Fees had it checked by a friend who was an expert in military history, heraldry and medals—he called it genuine.

Since Cody’s death, a rivalry has existed between these museums and their communities over Buffalo Bill, although much friendlier today than it was in the 1920s. The dispute started with his burial in Colorado, instead of in Wyoming, and it continued with the establishment of the museum there. The discovery and acquisition of the second Cody medal refreshed the competition.

Would Cody have given the medal away? It’s possible. He was a generous man and often “re-gifted” valuables that came his way. As reported in the Omaha Herald in 1889, he spent several days at a city hotel giving away diamonds and jewelry to friends who called on him. Given his nature, he could very well have given the medal to a pretty, shirttail cousin.

Only one of the medals can be the original, but can the other be a replacement? In 1904, a statute was passed allowing replacement medals to recipients for medals that had been lost or stolen; prior to that you would have needed some connections to get one replaced. Fees conjectures that Cody may have made such a special request after 1895 when his friend, Lt. Gen. Nelson A. Miles (another Medal of Honor recipient), became commanding general of the U.S. Army.

The government once sold parts of the medal, and some entrepreneurs made copies and fake Medals of Honor. Collectors could easily have purchased these until 1996, when the law prohibiting the buying, selling and trading of them began to be enforced. In this case, however, neither medal appears to be a forgery.

Archaeologist Douglas D. Scott, author of Custer’s Heroes: The Little Bighorn Medals of Honor, has examined around 100 Medals of Honor. He says both pendants appear in photos to be genuine on their face. “The figures on the face are sharp and defined, and the designer signature is clear on both,” Scott says.

“The engraving [on the Wyoming medal] is great and looks like it is clean and proper,” he says. Scott also notes that the Colorado medal, while not as clear and obviously having some damage to the reverse, is also consistent with medals of the time.

The inscriptions on official medals were inconsistent, and the Army does not have a record of what was inscribed on Cody’s medal, says Laura Jowdy, archivist for the Congressional Medal of Honor Society. She says Sgt. Leroy Vokes was also at the fight, and his medal has an inscription similar to the Wyoming medal.

“But what makes me nervous,” says Jowdy, after studying photos of both medals, “is that [the Colorado medal’s inscription and fonts] also match the style of another Indian scout whose medal we have.”

The Colorado inscription is also similar to the one printed on the 1888 poster.

Jowdy says she has photos of three medals bearing engravings that look exactly like the fonts used on the Wyoming medal. “What’s interesting about these medals is that they were all issued in 1897 and 1898,” she says. “This would hold that Cody perhaps requested a replacement medal during this period and received one.”

That timing would coincide with Miles being in the position to order a replacement for Cody, as Fees believes was the case. But if this indicates the Wyoming medal is the replacement, we still don’t know how the medal ended up in Pennsylvania rather than with Cody and his family.

Scott and Jowdy agree that the ribbons on both are replacements, based on their excellent condition. Scott says the Colorado medal has what appears to be a brooch and hanger that aren’t original, either, indicating the initial hardware had separated from the medal.

What bothers Scott about the Wyoming medal is the placement of the suspension holes. “They should be within the edging of the medal, but these are clearly below the edge,” he says. “Maybe it is a replacement piece as suggested, [but] the mystery only deepens for me.”

As far as the Cody family is concerned, there is no dispute: his descendants received a medal of the current design in Cody’s honor when his medal was reinstated in 1989. For the rest of us, the debate over the real medal may prove impossible to settle. It’s actually kind of “Codyesque” that we don’t know the truth behind these Medals of Honor, and—like Buffalo Bill’s Wild West—perhaps a visit to both museums is the only way that you can say you saw it.