Tradition is more than just a buzzword out Wickenburg way. Although it’s only an hour away from the sixth-largest city in the U.S., the historic Western town seems to exist in another world. And that’s just the way the folks there like it, says Julie Brooks, executive director of the town’s chamber of commerce. “The two things that strike you about Wickenburg are how authentic it is, and how serene it is,” says Brooks, whose great-great-grandfather settled in the area in the 1850s.

Indians lived near the Hassayampa River for centuries, growing corn, beans and squash. A few trappers drifted through in the 1820s and ’30s, followed by ranchers and prospectors, many from Sonora. The region became part of the U.S. in 1848, after the Mexican-American War.

A Prussian-born prospector named Johannes Henricus (later known as “Henry”) Wickenburg discovered gold in the region in 1863. Because he’d seen vultures circling at the time, he named his strike the Vulture Mine; it became one of the richest in Arizona. As news spread and optimists poured into the area, the small settlement a dozen miles north of the mine became known as Wickenburg. “Most people don’t realize there were ranchers and miners and many Hispanic families here before [Henry] Wickenburg came,” says Brooks. “They are often surprised to learn that we’re one of the oldest towns in Arizona.”

The town grew so big so fast that it nearly became the Territorial capital of Arizona in 1866. But the boomtown didn’t have a proper jail for years. Instead, miscreants were chained to the “Jail Tree,” a 200-year-old mesquite that still stands today.

Over the years Wickenburg served his namesake town as head of the local mining district, justice of the peace and a school inspector. He also donated land for the town’s first church and was elected to the seventh Territorial Legislature.

Nowadays the town’s premier attraction is the Desert Caballeros Western Museum, renowned for its collection of Western art and artifacts. Its faux Old West village, which showcases a slew of everyday antiques, is especially popular among visitors.

Get an overview of Wickenburg with a historical walking tour, which includes stops at six life-size sculptures representing such traditional Old West characters as a cowboy and dancehall girl, a schoolteacher, a miner and so on. “People get a big kick out of the statues,” says Sharon Ricci, the PR manager for the Desert Caballeros Western Museum. “They love taking their picture with them.” Keep an eye open for several small sculptures along the way—a Gila monster, rattlesnake, scorpion, tarantula, roadrunner and other desert critters.

The Little Red Schoolhouse, built in 1905, stands near the center of the historic downtown. Today the beautifully restored building is home to the Wickenburg Children’s Cultural Organization.

America’s dude ranch craze reached its heyday in the 1940s and ’50s, fueled in part by all the Western programs on radio and TV. Wickenburg, at one time home to 14 such establishments, became known as the “Dude Ranch Capital of the World.” Those traditions live on at the town’s riding stables, where you can still saddle up and mosey along a desert trail, and at local guest ranches, where you can live the cowboy life for days at a time. Wickenburg also hosts several professional roping and riding competitions throughout the year.

Visit in February to enjoy the annual Gold Rush Days and Senior Pro Rodeo and its spectacular parade. Experienced horsemen may want to look into the Desert Caballeros horseback ride, a five-day-long desert adventure that’s been a springtime tradition for nearly 70 years. 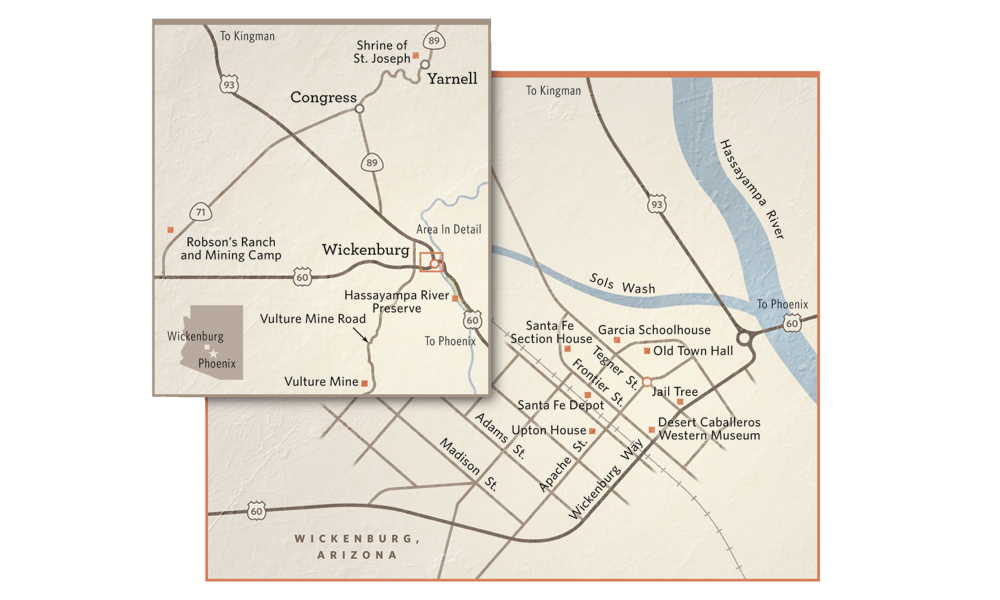