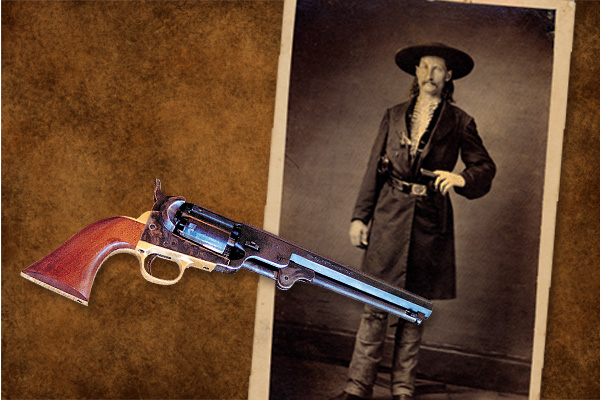 During the Percussion Era of the mid-19th century, savvy six-gunners like James Butler “Wild Bill” Hickok understood the problems inherent with open top revolvers and undoubtedly practiced raising the muzzle between shots to keep the caps from falling into the gun’s workings.

Following a few simple preventative maintenance steps can allow you to keep your own blackpowder firearm in top working order. I share here some beneficial tips for both novice and veteran shooters of blackpowder revolvers.

Although these tips are meant for those shooting a new replica, the following points also apply to a revolver that’s been taken out of long-term storage. If you are contemplating firing an original, vintage firearm, make sure to have it thoroughly checked out by a competent gunsmith before shooting it.

Proper Lubrication: After you remove your new replica gun from its package, you should strip down the gun and wipe it off completely to get rid of any dried or gummy oils the manufacturer added to keep the firearm from rusting during transport. Then lightly oil it. Remember, not enough, or too much, oil in a blackpowder revolver results in quicker carbon buildup (burnt blackpowder) during shooting. Carbon buildup causes cylinder drag and a slowing up or jamming of moving parts.

Clean and Remove Nipples: Clean out the insides of each of the nipples (cones) with a nipple pick; a pipe cleaner works well. Remove the nipples with a nipple wrench to ensure they are well fitted and can be removed again later for cleaning purposes. When replacing them, make sure they are snug—but not too tight.

Pop the caps: Before loading the powder and projectile, you should hold your revolver downrange in a safe direction and fire a cap on each of the nipples to be certain each one is clear of any obstruction.

Open Top Revolver? Muzzle Up: One especially prevalent problem in open top frame revolvers like the Colt-type replicas is that the percussion caps get lodged in the internal workings of the firearm. After you fire a shot, I advise you tip the revolver back with the muzzle up before cocking the hammer for the next shot. This allows the exploded cap to drop straight down onto the ground rather than into the workings. If, instead, you cock the revolver in a lateral position, the exploded cap might fall off of the nipple, down into the hammer channel in the frame and jam the workings, which could require field stripping the six-gun to remove the cap.

The “muzzle up” procedure is generally not necessary for revolvers like the Remington, Spiller and Burr, Joslyn, Starr and other six-guns with top straps.

By following these easy-to-follow suggestions, you can save yourself a lot of grief with your new replica revolver. You’ll also have a better understanding of its operation and have one heck of a time keeping your six-gun blazing.