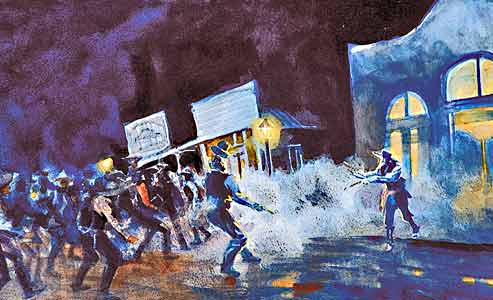 The summer cattle season is all but over, and Marshal Wild Bill Hickok has kept the peace in Abilene, Kansas—not an easy job. The last marshal, legendary Thomas J. Smith, was killed in the line of duty.

Hickok is not popular with the Texan cowboys, having cleaned out the brothels the month before, on the order of the city council.

About 50 cowboys want to attend the city’s Dickinson County Fair. When heavy rain sullies that venue, the boys wander from saloon to saloon on the main drag, bullying and intimidating patrons into buying them drinks. Some accounts suggest the cowboys pull this trick on Hickok, sweeping him off his feet and carrying him into the nearest saloon. Hickok humors the boys and buys them a round.

Rumors swirl that Texas gambler Phil Coe has sworn to get Hickok “before the frost.” Many citizens make themselves scarce as the evening wears on, fearful that things may get out of hand.

At about 9 p.m., Hickok hears a shot fired outside the Alamo Saloon. Having earlier warned the cowboys against carrying firearms, he confronts the group standing in front of the Alamo and encounters Coe, with a pistol in his hand.

Coe claims he fired at a stray dog, but as he says this, he pulls another pistol and fires twice, one ball going through Hickok’s coat and the other thudding into the ground between his legs. Hickok reacts in a flash and “as quick as thought,” according to the Abilene Chronicle, pulls his two Colt Navy revolvers. He fires them, hitting Coe twice in the stomach.

Others in the crowd are hurt. When another man brandishing a pistol emerges from the shadows, Hickok, not recognizing him in the glare of the kerosene lamps and his nerves on high alert, instinctively fires. He kills Mike Williams, a personal friend of his and a city jailer.

Hickok carries Williams into the Alamo and lays him down on a billiard table. Then he turns and disarms everyone he can find. The marshal warns them all to clear out of town. Within an hour, the place is deserted.

Abilene: The First Queen of the Cowtowns

Named after the biblical city of the plains, Abilene is the very first Kansas cowtown. Before Joseph McCoy set up operations here, it was just a small stop on the tracks of the Union Pacific Railway Eastern Division and a stagecoach stop prior to that.

McCoy was a cattle buyer from Illinois who was anxious to find a shipping point clear of the restrictions against longhorn cattle. The Lone Star bovines carried a tic that transferred splenic fever (known as Texas fever). McCoy needed a shipping point far enough west so the incoming herds would not contaminate domestic stock. He found it in Abilene (of course, as soon as farmers started moving in, the shipping point had to move). The first cattle season began on September 5, 1867, when the first train loaded with Texas cattle headed east. The season traditionally ran from May to October.

For the next three years, Abilene didn’t even have a local lawman, until the appointment of Tom Smith in 1870. But Smith was murdered in November of that year. After a few stopgap policemen came and went, Hickok was appointed marshal on April 15, 1871. He served eight months.

Wild Bill Hickok “fired with marvelous rapidity and characteristic accuracy,” The Junction City Union reported. However accurate he may have been, Hickok was profoundly affected by the shooting of his friend. In fact, he never fought with pistols again. Phil Coe died three days later, in agony, in his room.

As usual in the aftermath of a Western gunfight, the participants are either eulogized or demonized, depending on which side is doing the telling. In the case of Hickok and Coe, they got the full spectrum of attributes: Coe was either a “red mouthed, bawling ‘thug-plug’ Ugly—a very dangerous beast” or a “kind and generous hearted man well thought of by all who knew him.” Conversely, one Texas paper referred to Hickok as a “blood thirsty [wretch].”

Recommended: The West of Wild Bill Hickok and They Called Him Wild Bill by Joseph G. Rosa, published by the University of Oklahoma Press